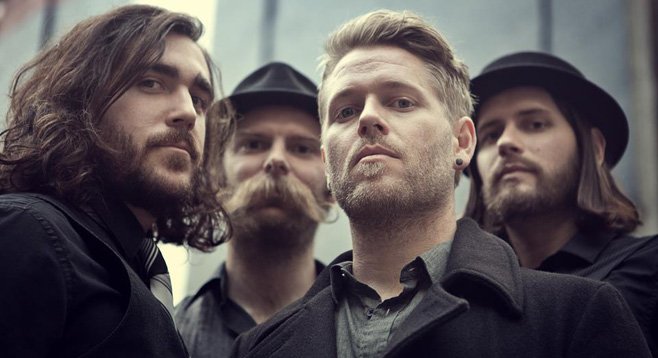 “My brother Josh and I started the Silent Comedy as sort of a side project,” says Jeremiah Zimmerman. “Sort of a lark.” They were both members of an aggressive punk band called Dehra Dun at the time. “But growing up, our parents listened to old folk music. We thought folk would be a fun thing to do on the side. We wrote some songs and thought we’d have a never-ending cast of side men.”

Their father John Zimmerman is a longtime a Pentecostal preacher who has headed up the Prison Fellowship Ministries. They lived for a while in Huntington Beach, and then the family sold everything and moved to India, then Spain, then back to San Diego.

“Our parents are hippie Pentecostals, the weirdest combination you could be,” Jeremiah says. They grew up loving the drama of the church. “It was fun! People jumping up and down, going crazy, people singing together.”

The brothers thought they’d like to get that aspect of religious performance-art going in their own bar gigs. Says Jeremiah, “We try to do some of that call-and-response thing with the crowd.” He calls their show a whiskey-fueled tent revival but with this caveat: “We’re not religious.”

It was during a family trip overseas in the mid-nineties when the Zimmerman siblings got their first taste of the cabaret and circus-rock scenes in Europe and India (Dehra Dun was named after an Indian city).

The punk band never took off, and in its absence they decided to go full time with Silent Comedy, which was at first completely acoustic. “Then it snowballed, and we got more energy and started plugging stuff in.”

With a look right out of a turn-of-the-century ghost town — heavy on the mustaches, waistcoats, and dusty trail hats — their sound melds acoustic rock with a touch of bluegrass, similar to Nickel Creek or the ’60s stoner days of Norman Greenbaum. “We're definitely NOT cabaret rock,” says Joshua.

Jeremiah describes the band as a blues and rock-and-roll and folk hybrid with acoustic instruments plugged into amps. “It’s a weird tweak on that sound...it’s electric blues rock played with folk instruments. Like a tent revival and a hoedown but happening at a whiskey bar.” Think O Brother, Where Art Thou? set to an experimental-rock soundtrack.

In 2008, the costume-heavy band won Best New Artist at the San Diego Music Awards. In 2009, they won Best Pop.

In April 2010, the band released their Common Faults album, which won Best Pop Album at the San Diego Music Awards that September. “The title comes from the overall subject matter of our lyrics,” says Joshua. “We were looking for a common strain through our songs, and my brother suggested that they all relate to common faults. We write primarily about the woes of society, and this title seemed to suggest that feeling.”

Violinist Ian Kesterson left the band in summer 2010, “to pursue some of his other passions in life.”

Joshua Zimmerman says their worst gig was “probably in Eureka California. The promoter had skipped town, and the bar was filled with leather-clad bikers who were not very happy to see us. We actually ended up playing pool and video games instead of music.”

In February 2011, Academy Award winner Ryan Bingham (Crazy Heart theme “The Weary Kind”) and his band the Dead Horses took the Silent Comedy with them for a month-long tour. Weeks before the tour began, the band had one final issue to work out — how to keep from freezing at night.

They posted a message on their website asking if people in cities such as Denver, Boise, and Idaho could put the band up for the night. “We have a bed in the back of our van and another bed in the trailer. But, we can’t do that because of the weather,” said Zimmerman at the time. “The response from people in the cities has been incredible, even in towns that we haven’t been to yet.”

“We’ve gone out on tour for several months at a time, but we’ve always had several day breaks in between. So, this will be the longest one that we’ve done straight through. Usually on our tours you can get away with blowing yourself out every night.”

On top of that, the band had to prepare to play large theaters instead of the small venues they are accustomed to. “Some aspects of our performance work really well in small clubs but won’t necessarily work in a theater with a 1000-person capacity. So, there is a whole different performance style that goes into that.”

For years, the Casbah was a home-base for them. “But we also looked for non-traditional places,” says Jeremiah, which included booking a sold-out New Year’s Eve concert with Transfer at the Lafayette Hotel in North Park. “A lot of local bands don’t think along the lines of producing bigger events.”

In 2011, the band scored part of a documentary film called Working Class, shot by Jeffrey Durkin of Breadtruck Films. That summer, they released a vinyl album, Cruelty & Clemency. They spent July on a U.S. tour with Saint Motel, and in August they won Best Pop at the San Diego Music Awards.

As of 2012, they’re using Square, a credit card machine for iPhones or Android, earning them much tech press and a boost in their merch sales. They played the 2012 Bonnaroo music festival, which ran June 7 through 10 in Manchester, Tennessee.

Around the same time, their song “Bartholomew” was heard in television promos for a new three-part History Channel miniseries Hatfields and McCoys. “After working with [The History Channel] for the Kevin Costner show...we were happy to provide the trailer song for their latest show, The Men Who Built America,” says Josh Zimmerman. The song, “Blood on the Rails,” wasshot as a video featuring scenes from the program.

In August 2012, the band won Best Pop at the San Diego Music Awards. In March 2013, they toured the UK with the Heavy. Several months later, through October 14, Sound Off Apparel partnered with the Silent Comedy to design shirts that aid in stopping human trafficking through worldwide awareness campaigns.

At the October 2013 San Diego Music Awards, the band won Best Pop and Song of the Year (“God Neon”). That December, they played 91X Wrex the Halls at Valley View Casino Center, along with Queens of the Stone Age, Vampire Weekend, Cage the Elephant, Alt-J, and Arctic Monkeys.

A video released that December for the song “Always Two,” directed by Krista Liney, generated some controversy due to its depiction of young girl whose club partying seems to lead to an implied rape scene.

In October 2014, Joshua Zimmerman moved out east, ending up in a NYC neighborhood called Long Island City, one subway stop from Grand Central Station. Shortly after that, the band recorded a track with legendary songwriter Kris Kristofferson on vocals. Their Common Faults full-length (2010 SDMA Best Pop Album) saw a vinyl reissue on April 18, 2015, which they promoted that day with shows at M-Theory Records and the Irenic.

Their third studio album Enemies Multiply dropped in October, preceded by a title single described by the band as "an examination of destructive personality types and how they affect the world around us."

“This album is a collection of anthems for dark times,” says Joshua Zimmerman. “Given the state of society today, we feel this is a perfect time to release Enemies Multiply. The average person has become more engaged in issues of exploitation and injustice than we have seen in recent years, and these songs speak directly to the feelings of anger, defiance, and frustration that many of us are feeling." The next single was for "Avalanche."

By 2019, the band had paired down to a quartet featuring the Zimmermans with Justin Buchanan and Chad Lee.