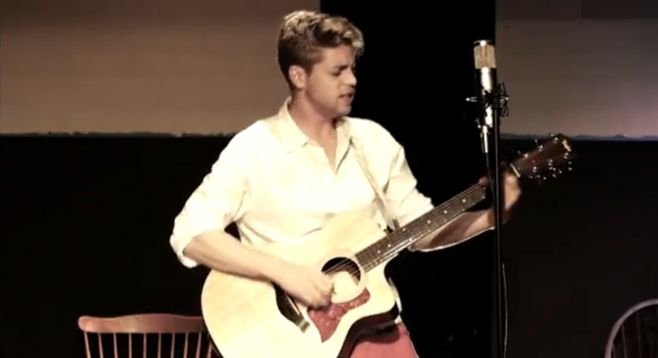 Singer/guitarist Sean Patrick Malone was a teen living in Sorrento Valley when he began taking sax lessons from Joe Cardillo (Endoxi). Even before the Sorrento Valley youth graduated from Francis Parker prep school in 2010, he was taking guitar lessons from local jazz guitarist James Kambic. Once he started uploading weekly cover songs to YouTube in 2011, he built up over 12,000 subscribers.

The Sorrento Valley teen earned 1.8 million YouTube hits for his cover of Elvis Presley’s “Jailhouse Rock,” just a few weeks after uploading it in mid-March, 2012. “The Elvis video was a surprise to me and everyone,” says Malone. “Once it reached the front page of YouTube, that’s worth several hundred thousand or even a million views, depending on the day.”

“The first videos that went viral were my original ‘Pas de Deux’ and cover of ‘Skinny Love,’ by Bon Iver,” says Malone, who credits his self-promotion on Reddit.com for kickstarting interest in his videos. “I received attention from the L.A. music industry, as well as well-known YouTube star Hank Green of the Vlogbrothers.” The Green brothers’ YouTube channel has scored over 200 million views.

“When I began uploading a video weekly, I asked Christina Grimmie, one of the most-subscribed YouTube musicians, to be my valentine. To my surprise, she responded with a ‘Yes’ video, and most of my success has come from this.” Grimmie, aka zeldaxlove64, is a pianist and singer whose YouTube videos landed her on Billboard’s top 40 chart and earned her a slot on tour with Selena Gomez.

Malone says being prolific has been another key factor in his internet success story. “I write nearly a song a week. My originals are the ones I’m most excited to share, but they generally don’t receive as many views as covers.... If I didn’t put a video out every Tuesday, I wouldn’t be nearly as successful.”

Not all his uploads are well received. “My Justin Bieber ‘Boyfriend’ cover is a hit or miss for most people. A lot of ‘Beliebers’ don’t like that I make fun of him. I usually respond to negative comments with witty responses, to keep things lighthearted. Music is for fun; it should never upset people.”