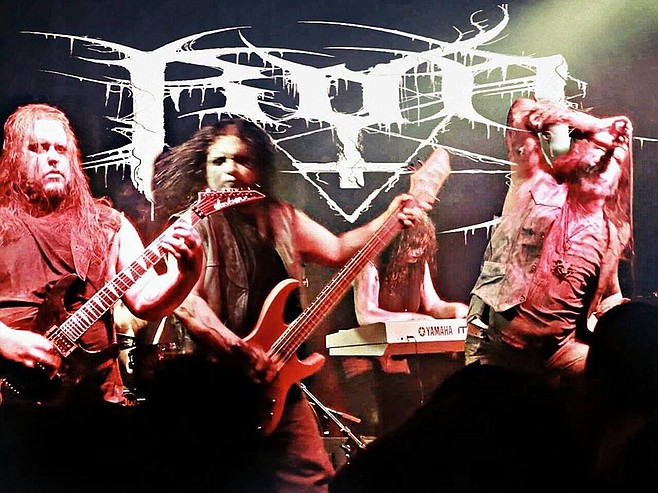 “Satan came to us and told us that San Diego needs to experience a Black Metal revolution,” according to the MySpace page for the makeup-wearing warriors of Ruines ov Abaddon, based in La Mesa.

This for me raised several questions, to which the band replied in an unsigned message.

Approximately when did Satan arrive? “3 a.m. on February 3rd.”

Was he basically human, or did he have one of those goat bodies or stag heads or something? “Perhaps it was his beady eyes, frowning like he’s looking into the glare of the sun, or his overly large ears, [but] his Texan accent and inability to enunciate reminded us of good old George W. Bush.”

Can you quote what he told you as closely as possible? “He’s actually more conversational than he seems. You would think him being the Lord of the Underworld, he would have more important matters to take care of…He’s quite the inspiration, you should hear him talk about everything he’s been through.”

Did Satan explain WHY San Diego needs a Black Metal revolution? “Because the music industry has sold out and is producing repetitive, untalented noise they’re labeling as music. Satan seemed quite upset as he explained this.”

Did you and Satan discuss anything else? “He actually mentioned that if, in the upcoming election, another Republican...became President, he was going to have to burn down the entire United States.”

What else can you tell us about Satan? “He’s good with his anger management.”

In early 2015, the band partnered with Tijuana's Brujos Brewing to produce a limited edition black IPA (7-percent ABV) specialty brew called Night Hag, available at shows while the band toured through early May.