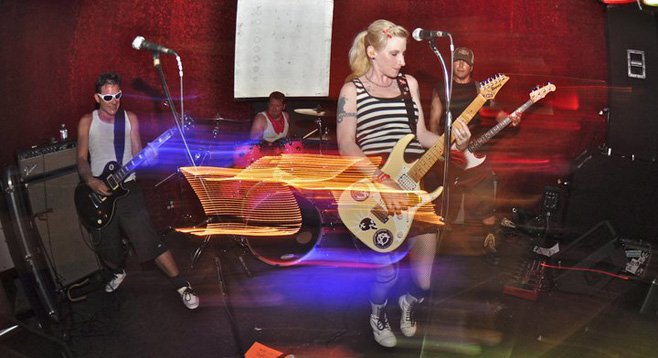 At Blind Melons on November 11, 2005: "We had just finished playing a song, 'The Way Sean Drives,' where I make fun of his crazy driving," says Revenge Club singer Amy Paddick of bass player Sean Lawson. "He got down on one knee right there on the stage and proposed into the microphone! I said 'yes' onstage, but off-mike I told him I was gonna kill him." The duo were later married in Las Vegas.

Paddick (formerly of the all-girl band Brag Doll) is now known as Amy Lawson. She says the Blind Melons gig was more pleasant than the time they played at downtown's Honey Bee Hive, when a fight erupted in the audience and resulted in an early finale.

"We just stopped in the middle of a song. Our drummer's friend was getting punched out there, and [the drummer] ended up jumping into the audience to join the fight." Paddick says police were summoned, and although no arrests were made, "That closed the bar down."

A different kind of blow-up almost happened during a 2007 national tour. "I woke up in the tour van in the middle of a field at about 5:00 a.m. to see a sign that said, No Trespassing, Unexploded Mines" says singer Paddick. "We were on the way back from Lake Havasu, and Sean [Lawson], after drinking some 32-ounce beers, went joyriding in the middle of the field."

Lawson explains, "Driving through Arizona takes you very close to gunnery and bombing ranges that the military uses for training. With everyone else in the van asleep, I decided I couldn't make it any further [without sleep]. I pulled off into a field on the side of the road, and as I drove further in, there was a small white sign. I couldn't really make it out at first. I pulled a little closer...[it read] Caution, Unexploded Munitions, Mines or Air Ordnance. No Trespassing Allowed.

"I yanked the wheel of the van, hit the gas, and pulled a big donut right there in the middle of Uncle Sam country." The jolt awoke the other bandmembers, and Lawson steered the van to the road. "It wasn't until the next morning that the gravity of the situation hit the others, and everyone was calling me a jerk, jerk-off, jerk-face...you get the picture."

In 2009, guitarist Doug Whalen was replaced by Tony Morebello, formerly of the Whiskey Dicks.