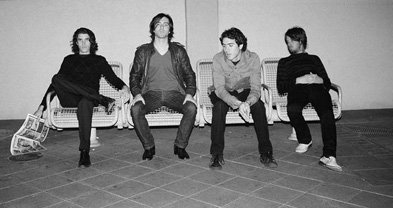 “Our music sounds like four guys creating something that is greater than the sum of its parts,” according to Republic of Letters singer/guitarist Chris Venti. “The songs can be characterized as a combination of melodically driven Brit pop, ambient rock, and post indie rock…imagine if Death Cab for Cutie, the Editors, and Nada Surf got together for a beer.”

The atmospheric art-rockers were founded in 2004 by Venti and his drummer/brother Nick. Bassist Martin Niwinski joined the band in 2005, with guitarist Adrian Thorstensen added to the lineup in early 2006.

In March 2007, Republic of Letters released a six-song EP, Spirit or a Ghost, recorded at Big Fish Recording Studios with producer Ben Moore (Switchfoot, Rocket from the Crypt, Hot Snakes, etc.). Around the same time, they embarked on a mini tour to play the Texas RockFest at the SXSW Music Festival in Austin.

Nominated Best Alternative Band at the San Diego Music Awards in 2008 and 2009, and Best Alternative Album in 2010, they've opened for acts such as Hot Water Music and Unwritten Law. Their 2010 album The Painted Hour was promoted with a related video for the song “Stories,” shot at the Ruby Room.

“It was a monumental effort and the best time we’ve had recording to date,” says drummer Nick Venti of the album. “We really wanted to push our sound on this one. We stripped away a lot of the guitar effects and focused on the songwriting and tons of other intricacies and details that we never had studio time to focus on in the past.”

The 11-song album, recorded with Brian Karscig (Louis XIV, Nervous Wreckords) at Blue Roof Studios (owned by Sean Cornell of Transfer), is the result of a year and a half of songwriting that produced over 30 songs.

“We spent the entire month of July [2009] tracking,” says Venti. “Twelve-hour days, six days a week, hammering out this recording.”

In 2011, they released a new album called Stories on the new Mass and Measure label started by drummer Nick Venti and a partner. It was supported by an Autumn college tour, which Venti says was sponsored by a non-profit organization.