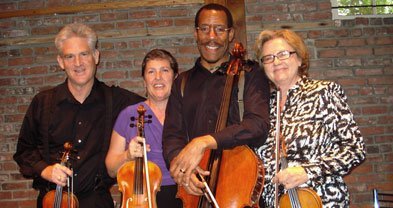 The origins of Quartetto Sorrento date back to the latter half of 2008, when Paula Simmons — violist, concert conductor, and co-owner of the Violin Shop in Sorrento Valley — received an email from Warren Gref of the California Chamber Orchestra. Gref was putting together a lineup for the upcoming Sunday-afternoon concert series at the Old Town Theater in Temecula. “I wrote him back and said I have a quartet,” says Simmons, when in fact she had nothing of the kind.

Her white lie was particularly daring because she knows how much work can go into putting together a quality quartet. “It’s extremely difficult,” says Simmons, “to find people that are compatible both musically and personality-wise.” As it turned out, she didn’t have to look far. Cellist Gordon Grubbs and both violinists — Alyze Dreiling and Greg Lawrence — are all (along with Simmons) members of San Diego’s Cabrillo Chamber Orchestra.

One thing that sets Quartetto Sorrento apart from other string quartets is that the two violinists take turns playing the lead. Switching roles within a string quartet is an unconventional approach, but so far, says Lawrence, “It’s been a serendipitous arrangement.”