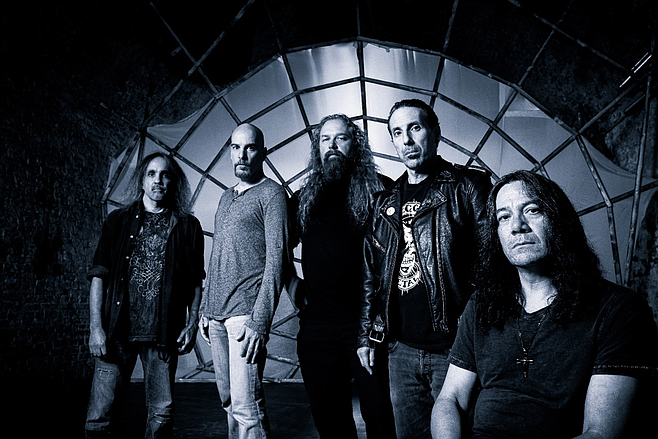 The first incarnation of Psychotic Waltz was under the name Aslan, after a character in the novel The Lion, the Witch and the Wardrobe by C.S. Lewis. With money earned from local shows and T-shirts, they recorded a self-titled demo tape in 1986. After discovering another band with the same name, they changed theirs to Psychotic Waltz and recorded a new four-song demo in 1988.

In 1990 they debuted with their independently financed album A Social Grace, which was released in Europe via a licensing deal with the German label Rising Sun Productions. Even though the album was very well received in Europe, being named "Album of the Month" in some European magazines, the situation in the U.S. was more difficult. As it was released under their own Sub Sonic Records label, with practically no promotion and minimal distribution, it remained an extremely underground item. Nevertheless, in 1991 they appeared in the famous Dynamo Festival in Holland.

After the tour, the band's guitarist, Dan Rock, suffered a near-fatal accident after falling off a bridge while rappelling. After he recovered, the band went on to record their second album, Into the Everflow. The album was recorded from August to October 1992 at Phoenix Studios in Herne, Germany, and was produced by Mekong Delta's main man, Ralph Hubert. The CD was released in Europe from Dream Circle Records and was also very well received, getting "Album of the Month" honors in many European magazines. After the recording, the band did a small tour as a preview of their coming album while Dan Rock was still recovering from his accident.

By that time, the band was at the peak of its popularity. They signed with Ralph Hubert's own label, Zardoz Music, for their third album, Mosquito. Recording took place in late 1994 in Record Plant and Madhatter Studios in Los Angeles with the help of the famous metal producer, Scott Burns. The initial response for this album was mixed, as the more conventional songwriting that the band followed led some hardcore fans of the band to label it as a "sell-out." This was the last album that was recorded with their initial lineup, as bassist Ward Evans left the band after two tours in Europe and was replaced with Phil Cuttino.

They entered the studio once again in 1996 for what proved to be their last studio work together, Bleeding. This time, Scott Burns did the engineering, but the record was mixed by Dan Rock and engineer Woody Barber. Before the band started touring in support for the new album, guitarist Brian McAlpine announced that he would not be able to follow the band due to familial obligations.

McAlpine was replaced by Steve Cox for the band's final two European tours. Phil Cuttino filmed a promotional video for the track "Faded." This proved to be disastrous when a crew member sued the band, claiming that a light on the set caused him blindness.

The lengthy court battle that followed, coupled with the different musical interests that the band members had, contributed to Psychotic Waltz's demise. Buddy Lackey was the first to leave. For a short while, the remaining members tried to continue with the band, but soon each of them followed separate ways. Dan Rock recorded two instrumental albums with his project Darkstar, Norm Leggio and Steve Cox created the band Teabag, and Buddy Lackey changed his name to Devon Graves and formed the band Deadsoul Tribe.

Drummer Norm Leggio recalls when Psychotic Waltz played on the same stage with guitarist "Dimebag" Darrell Abbott, who was then with Pantera. "We opened for Pantera and White Zombie at [former MTV personality] Rikki Rachtman's birthday party in 1993. It was at the Palladium in Hollywood...It was '92 and Pantera was blowing up. Their album Cowboys from Hell made them the band of the day."

Abbott was murdered onstage while playing with his new band Damageplan at a small venue in Columbus, Ohio. His murderer killed him and three others before getting killed himself by a policeman.

Leggio remembers, "He [Abbott] was always a real down-to-earth dude. Whatever was in his hand at the time he would share, whether it was a drink or a joint or whatever. He was always very cordial and polite."

Leggio went on to play in Broken Foundation, and for a time ran Blue Meannie Records in El Cajon. He cohosted "Another State of Mind," the all-metal Sunday night show that aired on Rock 105.3 for several years. He said he interviewed Dimebag on the air around 2002. "It was just as Pantera was breaking up." Leggio divulges that Abbott used to have a different nickname than Dimebag. "He went by Diamond Darrell back in the early days of glam rock. Lately his close friends just knew him as Dime."

Former Psychotic Waltz guitarist Steve Cox is also a veteran of local bands Dance Macabre and Death From Above, as well as tribute bands like Hell Bent (who specialize in Judas Priest) and Madman (Ozzy tribute).

Artist Mike Clift did Psychotic Waltz's early album covers, as well as drawning gory, zombie-heavy record covers for bands like GutRot, Nocturnus, DiamondHead, and Skinlab. “I used to put my phone number on my flyers, and I got a call about doing [Psychotic Waltz] artwork," he says. "They also contacted the infamous artist Pushead, but luckily my design beat his out.” Clift’s artwork for the cover of PW’s 1990 album A Social Grace paid $250. “They made a bunch of T-shirts, stickers, even a billboard…I charged $500 for the cover of [1992’s] Into the Everflow, and that became my standard price for several years.”

Clift toured Europe with Psychotic Waltz in 1993, receiving equal billing (and equal pay, $100 weekly plus per diem). “I was introduced as a sixth member and doing a lightshow backdrop of cued film clips that I synched up to the songs with a 16mm projector, two slide projectors with four carousels, and a 26-inch ten-speed wheel with colored gels and blockers, so I could do dissolves with the slides.” He says his declining profile after Psychotic Waltz split in the late '90s resulted in some imaginative rumors. “Please tell people I didn’t die trapped beneath a German castle, nor have I OD'd on heroin. The shit you hear after being gone awhile.”

As of 2010, the 40-year-old Clift also tattood. “These days, I charge $100 an hour for tattoos. I’ve tattooed some Psychotic Waltz imagery on my cousin, but most band tats I do are usually Cannibal Corpse, Deicide, AFI, [and] bands with distinctive artwork and logos.” He was later killed in a bicycle accident.

They embarked on a European tour as the support act for Nevermore and Symphony X in February/March 2011. Footage of their March 20 performance at 013 in Tilburg, Netherlands during their Power Of Metal European tour can be viewed at Blabbermouth.net.

Released in early 2011, their Architects Arise: The First Ten Years limited vinyl box set contains gatefold 180-gram LPs of all four of their studio records, plus their Aslan demo from 1986 and the Into The Everflow demo. Limited to 500 copies, an additional 500 extra copies of A Social Grace, Into The Everflow, and Bleeding were pressed in a different vinyl color and sold individually.

A March 20, 2011 performance at 013 in Tilburg, The Netherlands during the Power Of Metal European tour and a July 15 set at the Zwarte Cross (Black Cross) festival in Lichtenvoorde, Holland can be seen on YouTube.

2019 found the band playing gigs at both the U.S. and European editions of September's ProgPower festival and several October club dates in Germany, where they're nearly as big as David Hasselhoff. The reunited lineup had remained intact for nearly ten years: Devon Graves, Dan Rock, Brian McAlpin, Ward Evans, and Norm Leggio.

The band signed to InsideOutMusic, which announced plans to release their fifth full-length, their first new album in 23 years, as will reissuing their back catalog. Basic tracks were recorded with engineer Ulrich Wild in San Diego, then the rest of the recordings were done at Studio D in Austria, and finally the material was mixed/mastered by Jens Bogren (Opeth, Devin Townsend, Fates Warning) at Fascination Street Studios in Sweden. Cover artwork was created by longtime visual partner Travis Smith (Katatonia, Riverside, Nevermore).

The God-Shaped Void dropped February 14, 2020 via InsideOutMusic, preceded by a single for “Devils And Angels” with lyric video by Cloud Music Typography.