Project: Out of Bounds 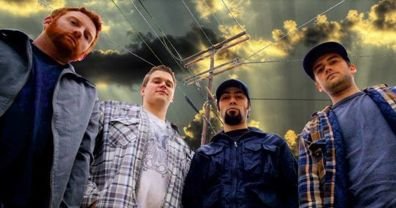 Sound description: Reggae with a touch of in-your-face progressive rock.

Project: Out of Bounds is a four-piece rock-reggae group, comparable to other SoCal bands like Sublime or Slightly Stoopid. However, where other bands of this mold add punk and ska in-between the reggae cracks, P:OB can be progressive, or even metal-like.

Kris Asgharzadeh likens his vocals to H.R. of Bad Brains or reggae legend Buju Bantan. As of summer 2009, the band was rounded out by trippy lead guitarist Austin Lorber, bassist Andy Chase, and drummer Ryan Rutherford.

"When we opened for Eek-A-Mouse at Cane's Bar & Grill back in 2009," recalls Asgharzadeh, "Project: Out of Bounds played, then High Tide played. As Eek A Mouse took the stage, a fire broke out in the kitchen and everyone ran out of the venue. From the outside, you could see flames engulfing the venue. Fire trucks arrived and had trouble putting out what turned out to be a grease fire. It wasn't too bad for us because, when they re-opened, we got to open for Eek-A-Mouse again for a makeup show."

"We also had a show in Oceanside around 2009 at a small bar. The manager that booked us told us he was planning on having Hell Angels there to watch a UFC fight. We were skeptical about performing for a biker gang after they had just watched two hours of mixed martial arts. He assured us that they love reggae, so we went with it. Big mistake. It was a bit intimidating as we set our equipment up while walking past some of these guys. We left to go eat and, when we came back, the venue was surrounded by undercover cop cars. The manager came out and told us the show was off, as the place had just been raided while we were gone."

As of 2014, the lineup was Asgharzadeh, Lorber, and Rutherford, supplemented by Nate Jones, Evan Jones, Jeff Hodson, and Jack Taylor.

The group released their Love Tone EP in April 2014, featuring guest appearances from Ivan Garzon of the Devastators, along with Erik Wainwright, Destructo Bunny, Ashley Lee, Swan Dive, Devin Minnich, and Melissa Barrison. Says Asgharzadeh, "The CD art was done by Oakland based artist R. Black. Black acheived notoriety from his Occupy Movement posters. Then he went on to design all the posters for an entire season of the San Diego Opera." The release was followed by a tour of AZ, NV, CA, OR, and WA.