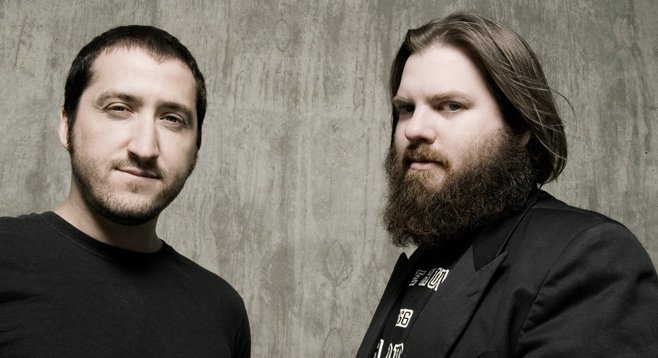 Pinback was formed in 1998 by singers, songwriters, and multi-instrumentalists Armistead Burwell Smith IV (also known as Zach Smith) and Rob Crow. They're named after the whiny janitor in the low budget sci-fi film Dark Star (played by Dan O'Bannon, who also co-wrote the film), a 2001 Space Odyssey spoof by John Carpenter. Samples from this film are frequently heard in the band's early work.

Drummer Chris Prescott joined Pinback in 2004 and recorded on the band's follow-up to 2004's Summer in Abaddon, which (as of summer 2006) had sold around 69,000 U.S. copies, according to SoundScan. For West Coast dates in 2006, Prescott played in both Pinback and his own band, the Jade Shader.

Man-of-a-thousand-bands Rob Crow has touched on one theme in nearly all his diverse musical projects: Star Wars. In addition to many Star Wars-themed songs, Crow's band Thingy has an instrumental song called “Kessel Run,” which, according to Wookieepedia, is “an 18-parsec route used by smugglers to move glitterstim spice from Kessel to an area south of the Si'Klaata Cluster.” Pinback cover artist Mike Sutfin co-created the book Star Wars: The New Essential Guide to Characters.

During Pinback's 2005 tour, Crow posted an offer for fans on ithe band's Internet message board: Any fan who could get the band tickets to an opening-night showing of Star Wars Episode III: Revenge of the Sith wouldn't have to pay for that evening's concert.

Crow’s memorabilia collection reportedly includes a working R2D2 robot, comic books, a super-8 film reel with scenes from the original Star Wars movie, and an array of toys that extends to the main tool of his trade: he customized one of his guitar rigs to look like an X-wing fighter.

In mid-June 2007, Pinback's new album Autumn of the Seraphs was leaked as a compressed archive of mp3s with numerous download links sprouting up on various message boards and blogs across the Web. Its official release date was in September 2007. In the interim, the band released a collection of rarities, Nautical Antiques.

Autumn of the Seraphs marked Pinback's second full-length release off Touch and Go Records. The first pressing of the album was packaged with a limited-edition bonus disc that featured three brand new, previously unreleased tracks. Those who purchased the album on vinyl recieved a complimentary coupon to download the album, complete with the three bonus tracks.

The band's autumn 2007 national and world tours were their first with the newest touring lineup. Joining Rob Crow and Zach Smith were Eric Hoversten (second guitar and keyboards), Chris Prescott (drums), and Terrin Durfey (keyboards and second bass), who was battling cancer...again. He was originally diagnosed in 1998 with malignant melanoma, a form of skin cancer with the ability to spread to other parts of the body.

Zach Smith has also played with Three Mile Pilot and his own band Systems Officer. Rob Crow is also with Goblin Cock, Other Men, Mission:Valley, and Optiganally Yours (with Pea Hix).

Smith and Crow began 2011 on a two-man tour, performing stripped-down Pinback sets as a duo. They pulled the whole band back together in San Diego to play two complete albums at the Casbah -- This Is a Pinback (January 10) and Blue Screen Life (January 11).

A new 7" single “Information Retrieved Part A” was released on Record Store Day, April 16 2011. The limited edition two-song single was their first new music since Autumn of the Seraphs in 2007. A U.S. tour kicked off April 20 in Tempe, Arizona.

In late 2011, L.A. filmmaker John David Schardt announced he was starting a Kickstarter.com campaign to fund a documentary about Pinback.

They were written up in the November 10, 2011 Moscow News Art and Entertainment section, previewing their November 12 Russian gig.

In September 2012, one of Zach Smith's basses was stolen from backstage during a San Diego Music Thing concert at the Sunset Temple. Drummer Chris Prescott chased the thief, who had slipped past security through an alleyway entrance, and the band finished their set.

On October 16, 2012, they released a full-length version of Information Retrieved, their first album since 2007 and their full-length label debut for Temporary Residence Ltd. (their previous label Absolutely Kosher having closed up shop). The album was previewed with limited edition Record Store Day EPs and on RollingStone.com, which premiered the new song “Proceed To Memory.”

After a new single appeared online, “His Phase,” a support tour kicked off with a west coast run on September 12, 2012, followed by an east coast leg in November. Their music video for “Sherman,” directed by Matt Hoyt, reinvents a 1962 cult Soviet film called Planeta Bur by interweaving reconstructed scenes from the low budget sci-fi flick with nods to two knock-off films.

They spent December 2012 on a European tour along with bassist/vocalist Zach Smith’s group Three Mile Pilot. A two-week tour with Judgement Day kicked off on January 16, 2013 at the Hard Rock in Las Vegas.

Besides Crow and Smith, the band has included at least a dozen other locals over the years, though the duo is most often accompanied by Montalban Quartet/Quintet drummer Chris Prescott.

They celebrated the tenth anniversary of their Summer in Abaddon album by performing it while touring with pop trio Tera Melos, kicking off September 3, 2014 in Phoenix and wrapping up at downtown's House of Blues on October 4.

An EP collection, Some Offcell Voices, was released in March 2017 via Temporary Residence, with a limited vinyl edition of 1,000 copies.