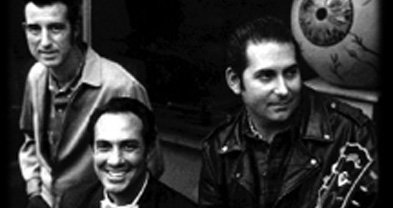 It all started when the Paladins were still in high school. They were already combining country and early rock & roll with blues and jazz, basically rockabilly, creating their own unique sound. Since then, the Paladins have released several full-length albums and a number of singles, and consistently performed and toured worldwide -- upwards of 200 shows per year, many years driving up to 75,000 miles.

In 1982, rock promoter and future Casbah owner Tim Mays was the Paladins’ first manager. Mays’s connections in L.A. and abroad helped launch the band on a trajectory that would culminate in more than one million miles spent on the road over the next two decades.

“We played a lot of gigs for Tim Mays,” recalls former Paladins guitarist Dave Gonzales. “He did [shows at the] Adams Avenue Theater, and he went on to open up the Casbah. He was the main guy in San Diego.”

The Paladins were a year or so ahead of the rockabilly revival. In step with L.A. roots act the Blasters, the Paladins emerged during an era that also produced X, Los Lobos, and San Diego’s Beat Farmers. It was 1982. The Stray Cats hadn’t yet hit, and the Paladins, with their Link Wray meets Carl Perkins vibe, were still something of a novelty in area venues such as the Skeleton Club on Market Street near downtown and Bodie’s on University Avenue.

Paladins bassist Thomas Yearsley says “In the ’80s, it was fiercely competitive. Our manager was Tim Mays and he’d have us opening for the Blasters, the Stray Cats, and every other ’80s band. We were relatively unknown. We needed something entirely our own. And there were two ways to do that.” One way to break through was via alcohol.

The Paladins brewed their own beer and shared it backstage. “Dark beer,” Yearsley says, “and we’d bring it to the shows in old Coke bottles. And then we’d do a kick-ass show that involved me doing backflips.”

Jim McInnes remembers the first time he saw the Paladins. “I said, these guys have really got this thing. They played rockabilly. They really got it.” McInnes, a local rock jock at then-powerhouse KGB-FM, played Paladins records on his radio show and invited them to perform at the station’s Tuesday night Homegrown shows at My Rich Uncle’s near SDSU.

But Gonzalez says that it was only through a chance meeting with a like-minded North County musician that the Paladins came to be in the first place. “I met Thomas Yearsley back when we were both seniors in high school.” In 1978, Gonzalez’s parents moved to Encinitas from East L.A.; he graduated from San Dieguito High School.

“Then I met Whit Broadley.” Broadley, a local, joined the band and gave them their name, taken from a popular television western of the 1960s. “He knew Tim Mays, he knew Dan McLain, and he knew all these other cats, and they took us under their wings and the next thing you know, we were playing roots music.”

Live shows are what have kept the Paladins around for this long: “We thrive on the sweat and the energy that our crowds create,” says the band. The Paladins play their music to admirers who represent a wide cross-section of music fans, from retro-‘50s fans to blues junkies to rock and rollers.

In August 2010, Yearsley was injured by a train while trying to get his dog off the tracks. He was Life-Flighted away to Scipps Hospital with a broken leg and other injuries. He recovered, and various benefit performances by local friends and supporters helped pay the hospital bills.

The band returned to San Diego in late September 2012 to play the Adams Avenue Street Fair. “We haven’t played San Diego in a while,” Yearsley told the Reader. “Maybe eight years.”

Founding member Whitney Broadley, who came up with the band's name, passed away in summer 2014. After recording new tracks at Thunderbird Analog Recording Studio, the band toured Europe. In 2018, the Paladins received a San Diego Music Awards Lifetime Achievement trophy.

On April 13, 2019, they were part of the 18th Annual Lonestar Round Up in Austin Texas, then on May 18 they headed back to the Doheny Blues Festival in Dana Point California, before crossing the pond to hit Europe for a summer tour in June.