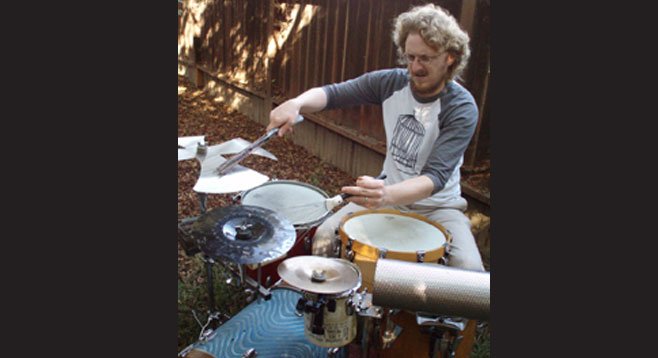 Percussionist Nathan Hubbard's first major gig was leading the quartet Return to One from 1998 to 2004. In the few years the group was together, RTO's music morphed from jazz to a strange music where Hubbard's melodic compositions were pitted against the group's free improvisation and electronic interests.

In 1999, he joined the free jazz quartet Cosmologic and soon after became a member of the Trummerflora Collective. The same year, he began performing solo, using percussion and his own homemade amplified instruments.

Over the past several years, he has branched out as a bandleader, forming the 30-member ensemble Nathan Hubbard Skeleton Key Orchestra, leading several other colorful ensembles, and composing music for a variety of performers. He also freelances around town, playing with the San Diego Chamber Orchestra and doing musical theater work and anything else that will feed his family.

Hubbard has also worked with Detroit-based percussionist Curtis Glatter, doing new music for silent film. He also performs solo and with ARC Trio, Cosmologic, and others. As a sideman, he plays regularly with Castanets, members of the Trummerflora Collective, and anyone else who will hire him. Hubbard also curates the concert series New Sounds Downtown and runs the Castor & Pollux Music label.

In early 2011, he and his wife moved to Chandler, Arizona, a suburb near Phoenix, though he said he’ll continue to perform on occasion with Rafter and his experimental Bossa Nova/doom metal/classical opera music project Ogd_S(11) Translation Has Failed. A year and a half later, in Autumn 2012, he and his family moved back to San Diego.

A sideline is playing with local theater productions, including the 2013 edition of The Who's Tommy at Vista's Moonlight Amphitheatre. “Oh, God, I’ve done a ton of shows,” says Hubbard. “I’ve done at least one show a year for the past 12 to 15 years. It’s not the most glamorous thing, but it’s an interesting work situation. This is pretty much an opera...I mean, it’s singing the whole time. The first time somebody talks without music behind them is in the second act. As opposed to some shows where you play a little glockenspiel, sit down for five minutes, and come back and play two triangles.”

Over the first five months of 2014, Hubbard released his five-volume album set Encinitas and Everything After, with one volume coming out at the end of each month. "Sometime in the late 1990s, I began writing pieces for this collection," says Hubbard. "As the years passed, I would write pieces, record them with different groups I was a part of, and then I archived them for a release at some point...all of the music has something to do with Encinitas, whether historical or geographical, and includes over five hours of music, featuring unheard or unreleased tracks from Cosmologic, Return To One, Ogd_S(11) Translation Has Failed, Everything After, Hourglass Ensemble, and many more."

Volume one has mostly medium size groups, often with two horns on the frontline, and fairly compact compositions. Volume two is larger groups, sprawling piece often based on modal vamps, dealing with waterways. Volume three is more chamber ensemble-esque, through composed pieces for medium sized ensembles. Volume four is noisier and more beat oriented, with the use of samples and antiphonal ensembles used through-out. Volume five is back to floaty melodic material with a variety of ensembles.

"Although I hate the term 'programatic music,' much of this music is inspired by places or people in Encinitas. My great-grandparents moved there in the 1920s and built their first house. My grandfather was in the first graduating class of San Dieguito High School and started his company 1948. My mother and father met in Encinitas and raised their family there. I spent the first thirty-some years of my life there."

Hubbard and his wife Kelly Hubbard welcomed the arrival of their son Henry Donald Hubbard on May 12, 2014 at 7:59pm. That October, Encinitas and Everything After was named Best Jazz Album at the San Diego Music Awards.

A new album was released in October 2019, This Stream, his first full-length recording featuring Hubbard's longtime trio with guitarist Kevin Jones and bassist Harley Magsino. “We have been playing regularly for several years, but instead of using any of the older pieces in the book, I decided to write a set of new pieces, so the entire recording is recent works that haven’t been documented on other recordings” explains Hubbard.

“The trio format is a favorite of mine, especially with guitar, there is so much space to play with and options on how to fill that space” adds Hubbard. Two of the tracks feature Hubbard overdubbed on vibraphone “We felt that a few of the pieces could use another chordal instrument to showcase the harmonic colors. Originally they were going to be guitar overdubs, but the vibraphone seemed to give a nice color change to the overall picture.”

Hubbard views the trio format works as a “pocket band” concept, performances often feature re-examining pieces from different ensembles, and looking deeper into micro-increments of interaction and form. “In general, the idea was for simpler forms and shorter tunes, where the showcase was on the group interaction and strength of the melodies”. Thru-out, Hubbards lazer-like melodic concept and subtle bandleading provide the perfect foil for well paced, highy enjoyable record.