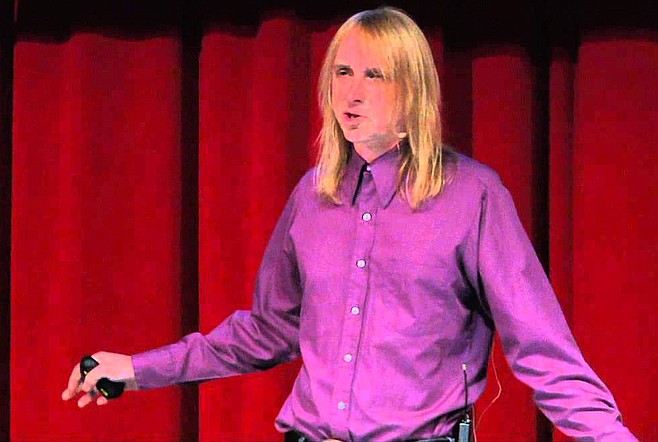 Influences: The Crawdaddys, Pretty Things, the Yardbirds, Status Quo, the Beatles, the Damnation of Adam Blessing, the Music Machine, the Monks, the Tell-Tale Hearts, the Morlocks, Manual Scan

Mike Stax moved from the U.K. to San Diego in 1981 to join his favorite band, the Crawdaddys. Two years later Stax launched Ugly Things magazine. "We cover underground garage bands, many of them obscure and most from the '60s," he says.

Stax specializes in searching for long-lost recording artists, unreleased tracks, and untold tales -- sometimes he just wants to know if one of his unheralded heroes is still alive. "The way I usually track these guys down is by going through [Internet] phone directories from all over the country -- just finding people with the same last name and making phone calls to everyone in hopes of finding my guy directly or maybe a family member who can put me on the right path....

"Not all of these guys have pleasant memories to share. A lot of them went through some real painful stuff, some serious tragedies. For the second issue I tracked down Sean Bonniwell from the Music Machine. They had a top-ten hit in 1966, but nobody had ever talked to him about those days...I tracked him down through a contact I had at Rhino Records as they were considering [releasing] some reissues [of Music Machine recordings]."

Two decades past his band's glory days, Bonniwell ended up living in a garage with no running water on a horse ranch in Porterville, California, north of Bakersfield. At the time, he was waging war in court against the Music Machine's former label, Original Sound, to recoup songwriting royalties.

Bonniwell's memories of the '60s aren't rosy. "We'd play almost anywhere, anytime, but our resources were never coordinated at all," he told Stax. "That and the fact that we rarely got paid. You couldn't take a check from a promoter back then because it would bounce. So I'd have a big brown shopping bag and take the cash from the door."

Stax says many long-lost rockers seem bewildered by his efforts to find them. "Most are completely baffled as to why. They're a bit skeptical or suspicious of what my motives might be. But once we start talking about their music and naming songs and specific details, they realize that I really do appreciate what they did. Then they start remembering things as we talk, and they're getting recognition that perhaps they never got before, even while they were still recording. Many of these guys have been out of the music business for 30 years or more, and all the remnants of their careers are packed up in boxes in the attic and just sort of forgotten. They've gone on to so-called 'respectable lives,' and their own children may have no idea about their dad's wild rock and roll life!"

He says one of the most satisfying hunts was tracking down the Monks, five American GIs who formed a band while stationed in Germany in 1966. "Since they couldn't grow their hair long like most rock and rollers, they shaved their heads like monks, dressed in black robes with a rope around their necks, and actually got signed by Polydor Records. They had a minimalist, stripped-down sound, with tribal drumbeats, feedback, an electric banjo they used as kind of a percussion instrument -- very ahead of their time. This was before anyone had ever heard of the Velvet Underground or Jimi Hendrix. They all had common names so I was having no luck finding them through phone books. Then, quite by accident, it turned out that a friend of a friend's uncle was Eddie Shaw from the Monks. Once I got a hold of Eddie by phone, I drove all the way out to Carson City, Nevada, to meet with him. We spent a weekend going through all his scrapbooks and photos, his original clothes, even his bass guitar. It was quite amazing, this long-lost time capsule he dusted off for us."

A lot of persistence and detective work went into finding Sid Herring from the Mississippi band the Gants. "Since the '60s he'd been sort of wandering the country, working in radio sometimes and just becoming kind of a lost soul. He was still writing songs, but he never did find an audience for what he did and was just doing some anonymous jobs like aluminum siding or something. He ended up getting the Gants back together a couple of years ago. They've played New York City a few times and some huge Mississippi State ball game of some sort."

When Stax caught up with pop Svengali Kim Fowley, who in the '70s put together the all-girl band the Runaways (remembered mainly for launching the career of then-teenaged Joan Jett), the loquacious producer provided several hours of insider insight. "He made quite a lot of sexual references and offensive remarks about women being dirty bitches, as you would expect from Kim," says Stax. "He claims to have seen P.J. Proby [1965's "Rockin' Pneumonia"] and actress Diana Dors making it in the back of Diana's Lincoln Continental.

"He also told me about someone called Anna the Potato Girl, who had this gimmick with, um, boiled potatoes. She would do this thing at Proby's parties where she put potatoes up inside her...It was a matter of how many she could get in there, and then she'd leave, with the potatoes still inside her, and go to her job at a department store. According to Kim, one would occasionally drop out onto the floor while she was ringing up a sale."

Since 1995 Stax has played with local mod-masters the Loons. His old band the Tell-Tale Hearts reunited in November 2004 for a set at the Ken Club and again in September 2007 for shows at the Casbah and the Adams Avenue Street Fair.

In 2009, Stax and producer Mike Kamoo produced an album of 12 vintage unreleased songs from British R&B legends the Pretty Things, on Stax’s UT Records. In January 2011, the label resurrected a long-lost single by the renowned local garage band the Nashville Ramblers.

“In 1986, ‘Trains’ and one other Ramblers song appeared on an obscure U.K.-only compilation, but few people noticed,” says Stax. “Many discovered the song for the first time in 2005, when it was included on Rhino’s Children of Nuggets box set, but it’s never had a proper release before. The [Ugly Things] release is an attempt to rectify that.”

The Nashville Ramblers — Carl Rusk (vocals/guitar), Tom Ward (bass/vocals), and Ron Silva (drums/vocals) — are known from local garage bands such as the Crawdaddys, the Gravedigger Five, and Mystery Machine. Rusk moved to New York City in 1986, though the band later reunited for some overseas dates and then a February 2010 reunion at the Tower Bar in San Diego. They regrouped again on January 21, 2011, for the Ugly Things reissue party at the Til-Two Club on El Cajon Boulevard.

When Ugly Things celebrated its 30th anniversary in May 2013 at the Casbah, San Diego native Glenn Ross Campbell (of the Misunderstood) performed with the Loons on a three-day bill that also included Ebbot Lundberg (Soundtrack of Our Lives), Cyril Jordan (Flamin’ Groovies), the Neumans, Lundberg singing with a reunited version of Love called Love Revisited, a Sloths reunion, the Rosalyns (local ladies from the Loons, Schitzophonics, New Kinetics, and Chinese Rocks), Benedict Arnold & the Traitors (tributing Paul Revere & the Raiders), the Rising Ramrods (members of Nashville Ramblers), and original “I’m A No-Count” singer Ty Wagner, in his first performance since the ’60s.

Stax and the Loons backed up Love for additional dates overseas.

In 2016, Stax released a book, Swim Through the Darkness: My Search for Craig Smith and the Mystery of Maitreya Kali, published by Process Media. "It's a strange, tragic story of music and madness that took me fifteen years to piece together based on hundreds of hours of interviews, deep research, and sleepless nights. This book haunted my dreams. Whether or not you're familiar with Craig Smith's music [Penny Arkade, Chris & Craig, Maitreya Kali, the Good Time Singers], I believe you'll find his story compelling."

The book includes rare photos, many of them previously unpublished, and a companion compilation of rare and unreleased music was made available for download from the Feral House and Process Media websites.