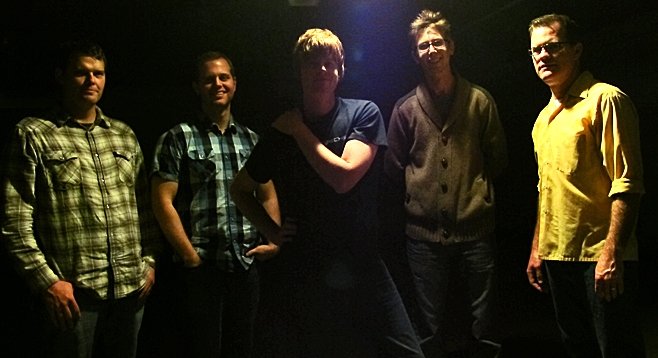 RIYL: Swim Party, the Beautiful Mistake, Get Back Loretta, a Fond Foundation, Republic of Letters, the Truckee Brothers, Delta Spirit, the Broken West

The Midwinters are an indie pop band, originally featuring Paul Donovan (of 1997-SDMA winners Dryve) and Josh Hagquist (of the considerably louder Beautiful Mistake), a duo who also happen to be brothers-in-law.

“We figured out we had enough in common to make music we liked,” says bassist Matt Cliff. “We started playing shows around San Diego and Southern California in 2006. With four songwriters and singers, we’ve got a diverse bunch of influences, from Wilco to Ben Folds, Ryan Adams, and Queen. We mix all of our musical tastes.”

Paul Donovan describes their music as “The Hold Death Cab for Steady.”

Through 2012, the lineup was rounded out by drummer/singer Erik Ekdahl (of Gayle Skidmore's band), Matt Cliff (bass), and singer/keyboardist Chris Hobson, known for his production and engineering work with Get Back Loretta, Jack the Original, Thieves and Liars, New Archaic, and Apes of Wrath.

“We have day jobs, mortgages, kids now — some of us — and the Midwinters is something we do as music fans. But we take it seriously.”

The band released an EP in summer 2010, Hinges, produced by Hobson. “It’s kind of about time for us to put something out,” says Cliff. “We’ve been doing this for four years. That’s the trouble with the ‘gentleman rocker’ approach, I guess.”

By the end of 2010, guitarist Josh Hagquist had left the band. Replacement player Jeff Hoyer made his live debut with the band over the first week of January, 2011. In May 2011, they released their Sometimes Live EP, recorded in June 2010. Next, a free 3-song EP of live tracks was made available on Bandcamp. “It was recorded at our CD release for the Hinges EP last June at the Belly Up,” says the band. “It’s got a couple songs from Hinges and an unreleased one.”

By early 2012, several new songs were streaming on their Facebook page, including “Window,” “All There Is,” and “What You’re After.”