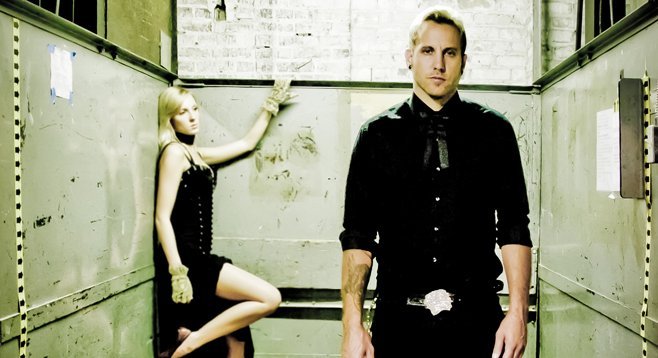 Electro-blues band Low Volts is fronted by guitarist Tim Lowman, whose great-grandfather J. Warren Lowman (aka Doc Lowman) was a Missouri gospel singer who wrote a book about how he escaped the electric chair.

“By the time my senior year in high school came around,” Lowman says, “I was getting into a lot of trouble.” Born and raised in Los Angeles, he says his mother sent him to live with his dad in Boulder, Colorado. “That was one of the best things that ever happened to me. I ended up meeting a friend who eventually taught me to play ‘Iron Man,’ by Black Sabbath. I haven’t put the guitar down since.”

As for the origin of Low Volts, Lowman says “There was a point when my last band decided to go on hiatus and I had no one to play with. Eventually, I just started playing these heavy, dirty riffs by myself using a glass slide. I had a dusty old kick drum set up in the corner of my room, and I would keep time with that and just jam for hours. So, basically, Low Volts was born out of necessity.”

Lowman, who has also fronted Blackout Party, says “It’s just me, a kickdrum, an old guitar and a microphone. Kind of a cross between early Elvis and Evel Knievel.” Lowman also plays flute.

“Those riffs evolved into actual songs. I would record them just so I wouldn’t forget them. But instead of multitracking, I put one microphone in the room and recorded the kick drum, vocals, and guitar live to save time. On playback, it sounded like three or four musicians. No one believed it was just me playing everything all at once.”

Just don't call him a one-man band. “I actually loathe the term ‘one-man band’ because it brings to mind the weirdo in the town square with kazoos in his ears and cymbals between his knees. I think Low Volts is something you have to witness live to understand...there’s something about the crash-and-burn element that really makes it exciting for me and, in turn, the audience. When everything is mic’d properly, there’s nothing stopping me from playing tiny bars to arena-sized venues. I always tell the sound guy that the force of the kick drum needs to crack sternums.”

“On my debut record, the only overdubs were some chains and tambourines, which I have girls play at live shows.” In concert, he’s also sometimes accompanied by a pair of female dancers known as the Hi-Watts, and the band's music has been heard on the Showtime TV series Weeds.

In Autumn 2014, Lowman was writing music to accompany a new series of videos produced by Stone Brewing Co., which tell the stories behind the company's various brews. The following Spring, a new video "Roam With You" was filmed and recorded live in a motorcycle machine shop, released online before the band embarked on a west coast tour through June, 2015. They supported Brian Setzer and his Orchestra for a 28-date national Christmas Rocks tour that ran through December 21 in Seattle, WA.

After Holwerda relocated to Nashville, TN, Lowman followed in 2016, although he eventually returned to San Diego, while Holwerda stayed in Tennessee. “I fell in love in Nashville on tour with Blackout Party,” says Lowman of his two years there. “At the time, you could rent a two-bedroom house on ¾-acre in East Nashville for $650, and all your neighbors were musicians. It made so much sense to be where music ruled the town and people shared the same passion. Plus it’s a great hub for touring the south and east coast.”

The 2018 comedy Super Troopers 2 features their song "My Fixin," alongside tracks by fellow locals Blackout Party and Stephen Pearcy. When the entire Roam With You CD was finally released that year, it shipped with a handwritten thank you note, stickers, and a bonus holographic Low Volts guitar pick that reads "Property of Low Volts."