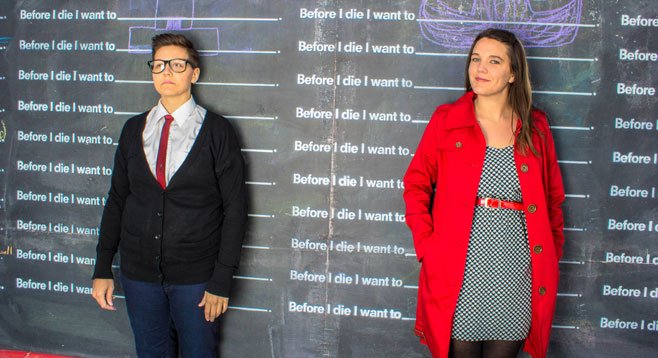 The Lovebirds are a female duo featuring Veronica May and Lindsay White. “Pretty little harmonies with a pretty little lady,” is how Veronica May describes the music of the Lovebirds. May — whose parents fronted the 1970s band the Flatlanders — has been playing piano for over 20 years, percussion for over a decade, and guitar for several years. A 2008 San Diego Music Award winner for Best Acoustic, May also plays with White in the Forget Me Nots, a 1940s-inspired ensemble.

“The Forget Me Nots sound is throwback Americana jazz, blues, and even some country, with rich four-part vocals,” says White, who got her start playing open mics at venues like Lestat’s Coffee House. “We make the new, original songs sound like antiques. My solo music is very soft and folksy but with potent lyrics. The Lovebirds is sort of a mix of all that.”

“When people ask what I’m like onstage,” says White, “I tell them to imagine Bob Dylan with a skirt.”

“I try to live by the Bob Dylan lyric ‘He not busy being born is busy dying.’ I have it taped to my computer screen at work, to remind me I better not let myself be stuck in a cubicle forever.” In 2009, White was one of six finalists in the San Diego Songwriters Guild’s Songwriting Contest at the Belly Up Tavern.

Veronica May -- who once collected Mad Magazines (“This explains a lot about me”) -- also fronts a self-named solo band. “I’ve always loved Lindsay’s singing...she has a nostalgic voice that renders kindness and understanding. And I love that.”

In November 2012, they opened for Susanna Hoffs (the Bangles) at Anthology. The duo ended their three year romantic partnership in early 2013, in order to preserve their musical relationship, shortly before the release of their sophomore full-length And a One, and a Two, recorded by Jeff Berkley at Berkley Sound and mastered by Grammy Award-winner Gavin Lurssen.

Tracks on the album flirt with a host of genres ranging from rock (“Sleepwalk” and “Round and Round”) to bluegrass (“Hook”) to folk (“Cellar Door”) to pop (“Colors” and “UNI”) to jazz (“Words Against the Wall”). The record was supported with a west coast tour running May 3 through 31, 2013, with stops in Hollywood, San Luis Obispo, Santa Barbara, San Francisco, Eugene, Seattle, and elsewhere.

The duo ended their three year romantic partnership in early 2013, saying it was in order to preserve their musical relationship. Their subsequent album And a One, and a Two was recorded by Jeff Berkley at Berkley Sound and mastered by Grammy Award-winner Gavin Lurssen.

“The coolest thing about this video is that it encompassed the spirit of the song so well,” says White. “The song is about how that 'thing' in all of us, that little piece of the Universe that we all carry within us, never dies, and how we can all take comfort in having that common awareness about ourselves and about each other. The video brought together all sorts of people from all different corners of the creative spectrum, but it all worked so beautifully together and really personified the message of 'UNI.' We couldn't be happier with the result.”

The folk/pop duo signed with Big Picture Media for promotion and marketing of their third album Breakup Shmakeup, released May 2, 2014, and supported by a west coast tour running May 4 through 30. “A lot of our songs [for the album] fell out of us,” May ponders. “I think most artists can say the times they create the most are the times they need to process something that is difficult. The irony in this latest album is that it is the most cohesive yet we only co-wrote one song on the entire album, which was partially because we were no longer in each other’s physical space and partially because we found it important to allow for space and time to clear the cobwebs.”

“Our friends and fans have always been in on the moment with us,” says White. “We don’t feel ashamed or embarrassed. They cry with us. But make no mistake, after we cry we’re going to rock your face off.”

In summer 2014, the duo was named one of six winners at the Grassy Hill Kerrville New Folk Competition for Emerging Songwriters, earning a cash prize and the chance to appear as part of the New Folk Concerts Fall Tour.

The duo represented San Diego in February 2015 as one of the Official Showcase selections at Folk Alliance International in Kansas City, MO, one of the largest music conferences in North America.