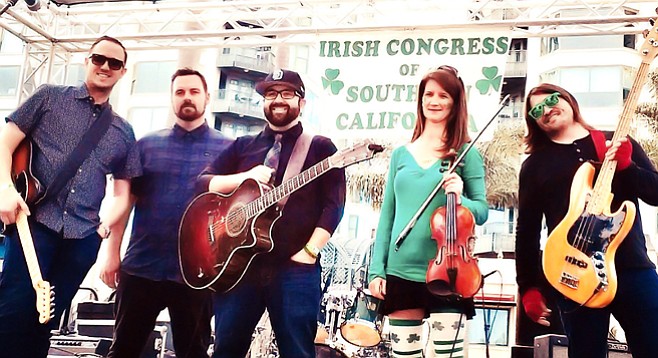 The first full-length from Americana fiddle rockers Lexington Field Lost At Sea (2007 Glorified Records) features their take on classic traditional tunes like "The Wild Rover" and "Molly Malone," as well as original songs such as "My Dream" and "City That We Love."

Their second album, The Lighthouse (2009 Glorified Records) features a continuation of their modern and edgy interpretations of old Irish tunes such as “The Old Black Rum” and “Pretty Irish Girl.” The Lighthouse was a transition to their style of Irish folk-punk that the band was gravitating toward.

A new CD, Poor Troubled Life, was released in 2012, followed by their Midwest Missile Tour, which ran through August 25, taking them through 22 shows, across 20 American cities, including their debut stops in Chicago, Denver, St. Louis, Minneapolis, Seattle, and San Francisco.

A followup, No Man’s War, dropped May 26 at the Belly Up. Produced by Jeff Berkley, the full-length features guest turns from Steve Poltz, Veronica May, and banjo-picker Dennis Caplinger.

A video for “Dear Old Friend,” from their new full-length No Man’s War, features guest star Steve Poltz (Rugburns, etc.), who's also heard on the album (along with Loverbirds crooner Veronica May and banjo-picker Dennis Caplinger).

Their next release Greenwood was issued in summer 2015 on the East Grand Records label. "We named the album after the street where we wrote, arranged, practiced and ultimately created this new full length record," says Gray. "We wanted to be simplistic with the album cover, which is a picture of our rehearsal space from the outside, but use color to bring you in." With the departure of violinist Cami Smith, the album features the recording debut of new band contributors Olivia Buscemi (fiddle), Tom Lazet (bass), and Anthony Belluto (guitar).

Their early 2016 Redwood EP was recorded at Weathertop Studio in Anza CA with Matt Maulding (former Brick Top Blaggers), featuring newly recorded versions of six songs from the band's first three albums. "We have always wanted to do an acoustic album and rethinking and recreating past Lexington Field fiddle rock songs was a challenge and breath of fresh air at the same time," said the band.

Violinist Cami Smith returned to the group in early 2018, after a three year hiatus. That year, the group released a ten-song pop full-length called Dreamers, and a faster-paced five-song pop-punk EP called Modern Times, both recorded at Weathertop Studio with Matt Maulding again. A new holiday single debuted in December 2019, "Christmas at the Pub."