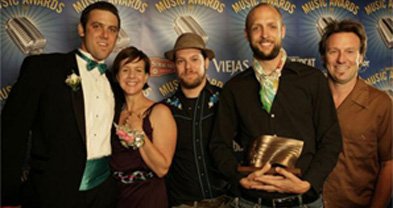 Sound description: Indie-pop based around the organ, guitar, and glockenspiel

Named after the nighclub from the film Rushmore, Kite Flying Society is a five-piece pop band. 2007 found them recording their sophomore effort, The Aviary, a follow-up to their self-released debut Where Is the Glow? The band won "Best New Artist" at the 2006 San Diego Music Awards.

The group announced they were splitting in February 2008. The quintet, fronted by Dustin Illingworth (vocals, guitar), was forced to break up because of the departure of two members: Derek Rast (keyboards), who is relocating to San Francisco, and John Martin (bass), who is moving to Shanghai.

"There are a number of reasons why this is happening," read a post on their MySpace page. "This seemed like a good time for all of us to pursue other things, musical and otherwise."

Thanks in part to a buzz in the music blogging community, Kite Flying Society paid for the pressing of their first album with preorders, eventually selling more than 1200 copies. The band drew attention from notable musicians, including Brian Wilson’s band, the Wondermints. Kite Flying Society opened concerts for Rogue Wave and Silver Sun Pickups and backed Peter Yarrow (of Peter, Paul and Mary).

Though their only television appearance as a group was on Fox Rox, their song “If I Could Split” was licensed by CBS for the How I Met Your Mother sitcom; other tracks appeared on action-sports DVDs.

Ten tracks were completed for The Aviary. While the band says the CD probably won’t be released, a new Kite Flying Society collection is planned, featuring seven of the completed recordings, plus “odds and ends.”

In late 2008, frontman Dustin Illingworth formed Gray Ghosts, with members of Down With Leo, the Ex-Friends, and the Bloody Hollies. Lizerbram and Caschetta later played together in Rio Peligroso.