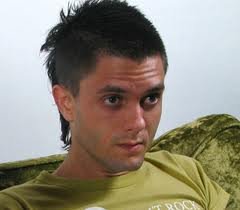 Justin Pearson is a vet of local bands like the Crimson Curse, All Leather, the Locust, Holy Molar, Head Wound City, Some Girls, Swing Kids, and ReTox.

“I’ve written songs that metaphorically address what happened to my dad,” says Pearson, who was 12 when his father was assaulted, robbed, and died during a 1987 altercation with patrons he’d met and argued with in a restaurant bar. “I wrote about it more directly in my book [From the Graveyard to the Arousal Industry], but, musically, I’d rather keep it a little more broad. You can’t get into a lot of depth about topics like death, alcoholism, and bad parenting in a two- or three-minute song.”

Pearson says his father’s drinking and aggression “probably provoked what happened. To me, he was kind of like the quintessential dickhead from John Hughes films, kind of like the preppy jock that everyone hated. He was really against the fact that I was into punk. He kept saying, ‘Sid Vicious was a heroin addict. You’re gonna become a drug addict.’ I didn’t want drugs, I just wanted to listen to cool music.”

Almost never a drinker, Pearson says, “I’m too smart to do the things [my dad] did...until around a year and a half ago, I’d never even played a show in a 21-and-up venue.”

The year after his father’s death, Pearson was living in Clairemont, where he met Eric Allen, with whom he later formed the 1990s hardcore/screamo band Swing Kids. Pearson -- who also played in Struggle -- ended up forming a new record label, Three One G, to release music by both Swing Kids and Eric Allen's band Unbroken. “Unbroken was Struggle’s sister band, and was easily one of my favorite bands at the time,” says Pearson. “Eric suggested I release two new tracks that they were going to record while on tour on the East Coast. He said I could use the material for the first release on a label that I should start, and jokingly called it JP Records.”

Shortly after Swing Kids split in 1998, Allen committed suicide. “That was the other big heavy-hitter for me, as far as someone dying.”

In 2011, Pearson joined several other former Swing Kids for a European tour under the name Blue Note, with All Leather guitarist Nathan Joyner in place of Allen.

“I would find myself onstage, and these emotional strings were being pulled. Even though I’m an atheist, in a sense it made me feel as if Eric was living on.... What he and I shared as musicians and friends, those elements have carried on into all my projects.”

Next came the Locust, who donned matching human-fly costumes with hoods and mesh sockets for eyes and mouth. How to describe their music? IED rhythms. Growled/shrieked lyrics. A virtuosic noise, touched by riotous energy. One Locust tune ran 54 seconds and 7000 notes, the playing high-voltage, incandescent. With this band, Pearson played a transparent acrylic bass, built by Dan Armstrong.

When a local singer named Eric Sage, AKA Eric Crabb, was recruited for a new version of the 1970s pop group Bay City Rollers, Pearson was tapped for a locally shot video version of their main U.S. hit “Saturday Night,” filmed in early 2011 at downtown’s Voyeur nightclub. “I played in that band. But it was just the guitar player [Ian Mitchell] and a bunch of hacks, me being one of the hacks. I quit after we filmed the video for that song. And check this out, they tried to make me play a 5-string bass. WTF?!” Ian Mitchell was only a Roller from April through November 1976.

On June 24, 2011, Pearson appeared on the first episode of Young, Broke, and Beautiful, an “off the beaten path” travel show, aired on the Independent Film Channel. When it aired, he was touring Europe with other surviving members of the reunited Swing Kids (now known as Blue Note), who split after the death of co-founding guitarist Eric Allen.

“I was asked to be in a documentary film about Misfits record collecting called ’77–’83,” Pearson tyold the Reader in late 2011. “They want to interview me about how I obtained some of the super-rare vinyl I have, which I got in super-weird ways."

“When I was about 13 or 14, I had a buddy who worked at Off the Record [in Hillcrest at the time]. He called me up and said that I had to come in and check out some stuff before they were put out.... There was a slew of Misfits and Samhain stuff, all autographed and all rare items. I asked how they got all that, and he said that [former Misfits frontman] Danzig’s current girlfriend, who apparently lived in the area, got dumped and thought he was a douchebag. So, she sold whatever she had of his for next to nothing.”

Pearson splurged on several items, even though, he writes, “My financial income was partially from SSI and partially from working at Kobey’s [Swap Meet] on the weekend.” As for the treasures he wants to show off in the documentary, “One piece I obtained was the Die Die My Darling 12-inch EP on white vinyl, autographed by Danzig.” Also, “A [Danzig-fronted] Samhain LP November Coming Fire that was on orange vinyl — limited to 500 copies — that came with the insert that was no longer part of the pressing at the time.”

So what does Pearson think of the current Danzig-less version of the Misfits fronted by Jerry Only? “I think it’s garbage. Every attempt after Samhain, and with any of the players of the said bands, was just half-assed, in my opinion. I saw Danzig right at the birth of the band and watched them get booed off the stage when opening for Slayer...seeing the [post-Danzig] Michael Graves version of the Misfits was bullshit.

“I have hung out with those cats a bit and, well, they are not that rad. But there is the whole nostalgia aspect to it, which I think is important. Especially for record collectors.”

Pearson appears in IFC's Incompresa, a 2015 film by Asia Argento featuring two tunes by Pearson and Gabe Serbian (released on vinyl as a limited edition 7-inch). Serbian and Pearson also teamed up at the end of 2015 for a new band called Dead Cross that also featured Michael Crain on guitar and Dave Lombardo on drums, making their concert debut December 2 at the Roxy in L.A. In summer 2016, he guested on a single from Moving Units, covering the Joy Division song "Warsaw."

2018 saw the release of a book called The Race to Zero, a collection of all lyrics he has written throughout his career up until 2018, as well as various examples of short creative vignettes and prose.

In early 2020, it was announced that a documentary about Pearson was in production, Don't Fall in Love With Yourself, which explores his life from childhood tragedy through his appearance on Jerry Springer's show and his role in the local music scene. Interviewees include Dave Lombardo, Eric Paul, Gabe Serbian, Bobby Bray, Travis Ryan, Jeremy Bolm, Alexis Marshall, Jon Syverson, Molly Neuman, Becky DiGiglio, and other material is sourced from dozens of VHS and mini-DV tapes recorded over three decades.

Pearson is also one of 12 American musicians featured in a 2020 documentary about independence and music, Parallel Planes, along with interviewees Michael Gira of Swans, Mick Barr of Orthrelm, Ian MacKaye of Minor Threat and Fugazi, Valentine Falcon of Get Hustle, Jamie Stewart of Xiu Xiu, Anna Barie of These Are Powers, Weasel Walter of Flying Luttenbachers, Jenny Hoyston of Erase Errataof, Alap Momin of Dälek, Greg Saunier of Deerhoof, and Otto von Schirach.