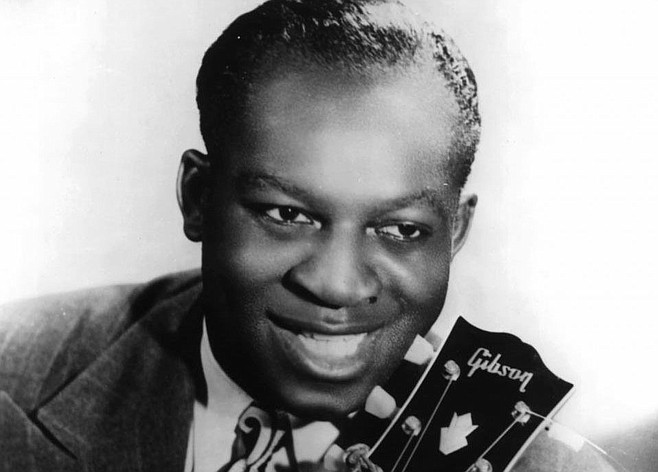 Originally from Oklahoma, Jimmy Liggins (1918 -1983) was still a teen when his family relocated to San Diego in 1932. The younger brother of blues pianist Joe Liggins (whose L.A. band the Honeydrippers hired young Jimmy as a driver), he boxed locally under the name of Kid Zulu until he turned 18, after which he pursued a career playing RnB music from the late 40s through the early 1960s.

Often dubbing his act Jimmy Liggins and His Drops of Joy, he recorded over a dozen singles for the Specialty Records label, including "I Can't Stop It" b/w "Troubles Goodbye" (1947), and "Cadillac Boogie" (recorded in 1947 and released in 1948, featuring an early example of rock-style electric guitar distortion) b/w "Tear Drop Blues."

Acts like Little Richard, Chuck Berry, Bill Haley and Elvis Presley were said to have been influenced by Liggins, with 1948's "Cadillac Boogie" cited by some as the first true rock and roll record (having preceded Ike Turner/Jackie Brenson's "Rocket 88," the 1951 track most often given that debatable distinction).

Liggins left Specialty in 1954 to record for Aladdin Records, which released his popular ode to drinking, "I Ain't Drunk" (recorded in 1949 but not released until 1954), a track later covered by Albert Collins. Aladdin also released "Boogie Woogie King" b/w "No More Alcohol" (1954), after which Liggins toured for several years.

He released no full albums in his lifetime, only singles, though several posthumous compilations have been issued, some containing previously unreleased tracks.