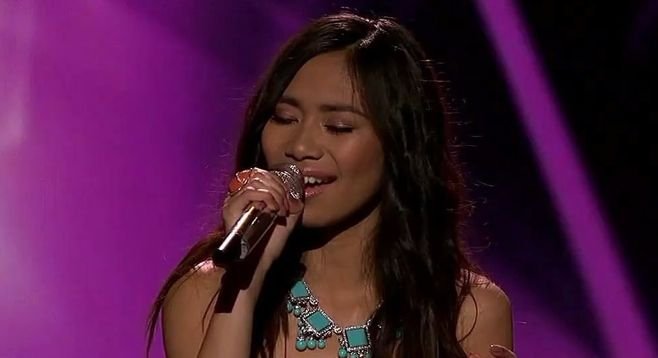 Born and raised in Chula Vista, Filipino-Mexican American singer Jessica Sanchez started singing when she was two and lists Mariah Carey, Etta James, and Ray Charles among her musical influences. At age ten she performed Aretha Franklin’s “Respect” on an episode of Showtime at the Apollo.

“I took any opportunity I could to sing in front of other people, like at birthday parties or just in front of my grandmother’s friends, but I was so shy that I had to stare at the floor the whole time,” she says.

A year later, she competed on the premiere season of America’s Got Talent, reaching the wild-card round before getting cut. Over the next few years, Sanchez performed at venues both large and small (including a 2008 San Diego Chargers game) and released a number of covers (such as Etta James’s “I’d Rather Go Blind”) through an independent record label.

Sanchez first earned widespread notice while appearing on the 2012 edition of the TV show American Idol, when she was 16 years old. Among the songs she performed are “Everybody Has a Dream” (Billy Joel), which prompted judge Randy Jackson to say “You’re flawless. It was perfect.”

“When God was giving out vocal cords, you were so in the front of the line,” said Steven Tyler.

She advanced to the next round of competition, on the strength of her performance of “Sweet Dreams” by Beyonce. She dodged the bullet again on April 12, 2012, despite receiving the lowest audience votes, thanks to the judges using their only “save” of the season to keep her on the show.

By the end of April, she was among the remaining top five contestants. She lost to Phillip Phillips on May 23, 2012, having scored second place for this season.

She later signed a major label deal with Interscope Records and performed Marvin Gaye’s “All I Need To Get By” at the Democratic National Convention. “Being up on that stage felt so great, I just went crazy dancing and singing.”

Among her other post-Idol adventures are visits to her mother’s homeland of the Philippines, where Sanchez performed a solo show at Quezon City’s Smart Araneta Coliseum on Valentine’s Day. “I got so much support from the Philippines when I was on Idol, so it meant a lot to me to go back there,” she notes. “Right when I got off the plane there were all these people waiting to greet me: it was pretty amazing.”

The Philippines also served as the filming location for “Jump In,” Sanchez’s danceable collaboration with apl.de.ap of the Black Eyed Peas.

“The songs on my album show the more fun, more pop side of me,” says Sanchez. "There’s a couple of ballads, but it’s mostly all about music you can move and dance to. Putting together the album, it was really important for me to try to capture all the things we go through in this life -- falling love, breaking up, trying to make your dreams come true -- but also create something fun and catchy with great beats.”

More early 2013 endeavors inclued performances at the White House’s 2013 Easter Egg Roll and the Carousel of Hope Ball (an annual benefit for the Children’s Diabetes Foundation), which she followed up with two guest appearances on Glee as a rival school singer, including the May 9 season finale.

We all are looking for Jessica Sanchez to win American Idol. Either way, she will be a big star. Good luck Jessica!