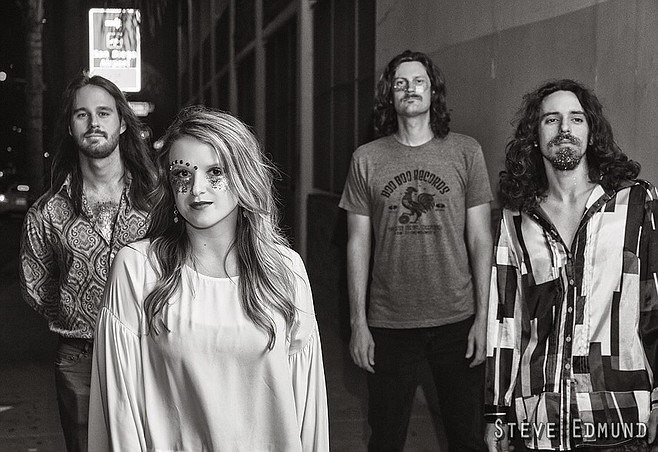 Their self-titled debut EP was released in early 2016, with several tours launched through the year. "We played the Stork Club in Oakland," recalled Jennie Lynn for the Reader. "Some say the bathrooms still haven't been cleaned to this day."

A new single called "Higher Tides" featuring Will Parsons of Grim Slippers was issued in March 2017, from the Skydriver EP released in July. Tracks were recorded, mixed, and mastered in San Diego by Brad Lee at SDRL. "The song 'Skydriver' is about climate change and how we are senselessly destroying our planet," says Lynn. "We wanted to give the impression of flying away from a dying Earth in search of the next inhabitable place humans can live."

A new track was released in January 2018, "She's Gone," the first in a planned series of monthly releases. At that time, returning singer/keyboardist Daechelle Hernandez had departed again, while former Grim Slippers member Will Parsons, who'd guested on the "Higher Tides" single from the Skydriver EP, joined Imagery Machine as permanent bassist.

The "She's Gone" single kicks right in with a vintage-sounding siren torch song, somewhat of a departure from the music they debuted with just three years previous. “Earlier [Imagery Machine] had a more defined reggae sound, but we’re moving away from that for a modern rock foundation,” says Lynn. “The new songs have more elements of dream pop, with ethereal harmonies and vintage effects.”