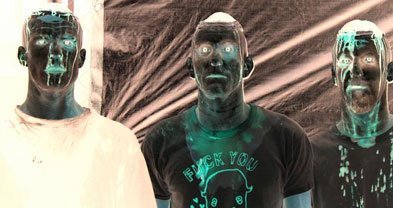 A lot of metal bands have given in to the belief that the "more crap we can bang on and the more filters and effects we pipe our sound through, the better." Hostile Comb-Over, a three-piece (guitar, bass, and drums) with all three members alternating vocal duties, is no such band.

Hostile Comb-Over covers the metal basics and that's it: thick, almost Primus-like bass lines, rowdy guitar, gunfire drums, and lyrics screamed as loud as possible. Mix it in a bottle, stuff a rag in the hole, light the rag, and throw.

The group consists of vocalist/guitarist John Cota (City of Whores, American Ligature, Congress of the Cow, Twenty-First Century Lepers), bassist Cole Mears (son of Indy racer Rick Mears and player for American Ligature, Freedom for Saturn), and drummer Ben Johnson (Tourettes Lautrec and the Long and Short of it), who also tends bar at the Casbah. Their album Escape from Mount Island was released in 2006.

In summer 2009, Hostile Comb-Over announced that it was playing its final show in August at the Radio Room. According to John Cota, "I've started something new called Rats Eyes with Jason Blackmore from Sirhan Sirhan, Jimmy Armbrust from Louis XIV, and Gabe Serbian from the Locust."

The band staged a reunion performance at the Bancroft in Spring Valley on February 2, 2019, for a bill that included the recently reunited Demasiado.