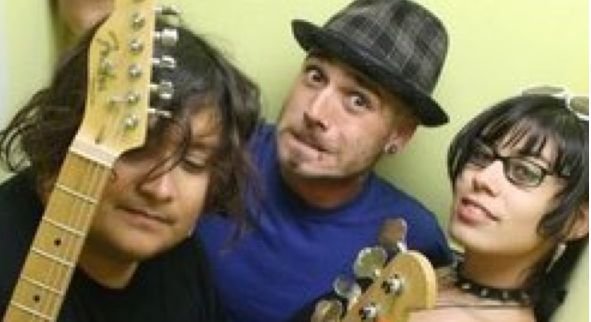 Sound description: Alternative rock with punk flavorings, comparable to bands such as Stone Temple Pilots, Nirvana, and even Black Sabbath. The music is radio friendly, extremely catchy, and does not stick to one meter.

Hocus is fronted by Lando Martinez (aka Fat Lando), a self-described “Mexican from Texas” who retired from the U.S. Navy in 2008 after serving 20 years. “I’m a rarity,” he says. “I’ve served my country honorably, and I write great songs. Plus, I’m retired and look 25.”

After playing their first show at O’Connell’s in January 2009, the band’s debut album Better Than You was nominated Best Local Recording at the 2010 San Diego Music Awards.

Left-handed guitarist Martinez describes his songwriting as “A blend of ’90s, British, and today... I’d say Hocus music is like a smooth, relaxing drink with a twist of razor blades. Music that is melodic and raw at the same time. For being a three-piece, we make quite a ruckus.”

In 2010, the album A Millennium Tribute to Stone Temple Pilots (Versallis Records) included a bonus disc with the Hocus song “It’s Been 10 Years.”

Martinez describes the band's best gig to date: “It was at Hot Topic in Chula Vista, and we made it fun by having a jar with strips of paper each containing a song. We then had the audience pick a song and then we played. So it made it interactive with them. We also sold out of t-shirts and CDs too!”

As for the WORST gig: “The Knitting Factory in Hollywood. We didn’t perform badly. It was the case of getting stuck in traffic and arriving at our time slot fifteen minutes late. So we had a rushed arrival, set up and a performance of only fifteen minutes. We left four hours ahead, but still got stuck in Saturday traffic. Lesson learned: leave at least eight hours ahead when gigging in Hollywood.”

Bassist Vesper Rodriquez, who also plays with Bricklayer Bosh, left the band in 2011, to be replaced by bassist/singer (and trained violinist) Lorina Montejano (aka Lolita). With newest drummer Ryan Schilawski (aka Rhino), Hocus re-recorded their single “Mary’s Fault” at the Center for Recording Arts and Technology, located at Southwestern College in Chula Vista.

In March 2011, they released a video for “Whatever Happened to Baby Jane.” They played NudeStock 2011, held at De Anza Springs Clothing Optional resort in Jacumba from July 29 through 31. The trio appears in the upcoming documentary A San Diego Concert Film, which also features such locals as the Soft Pack, the Silent Comedy, and Transfer.

They appear in the upcoming documentary A San Diego Concert Film, which also features the Soft Pack, the Silent Comedy, Transfer, and others. When frontman Lando Martinez auditioned for the 2012 season of The Voice, he says “I was the only rock guy in a room full Arethas and James Browns.”

In early 2012, a new single, “Pain Reliever,” began streaming on their website. Hocus was nominated for Best Rock Band at the San Diego Music Awards 2012. The following November, they released a new full-length, Outside Your Door, recorded and mixed at Raunchola Recordings #1, Spring Valley, produced and engineered by Rich Mansor, and mastered at Soundhouse, Seattle, WA, by Jack Endino. The album includes a Doors cover, “Five to One.”

Their 2016 album Damage With Care features nine songs, some of them remakes of earlier tracks. It was recorded and mixed by Rich Mansor at Raunchola Productions in Spring Valley, and mastered by Tad Doyle at Witch Ape Studios in Seattle, Washington.

They toured northern California, Oregon, and Washington in summer 2017, beginning July 12 in San Francisco and including a July 15 date at Aberdeen, Washington's three-day musical celebration of hometown hero Kurt Cobain.