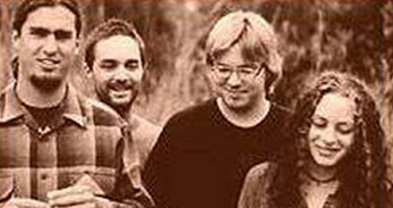 RIYL: Zappa, Beefheart, They Might Be Giants, the Residents

Influences: Frank Zappa and the Mothers, Captain Beefheart, Guided by Voices, the Archers of Loaf, Can, the Residents, Devo, Slint, Drive Like Jehu

Heavy Vegetable showed promise with each of the four tracks on the EP A Bunch of Stuff (The Way Out Sound, 1993), particularly "Doesn't Mean Sh*t," and then redefined progressive hardcore on the album The Amazing Undersea Adventures of Aqua Kitty and Friends (Cargo, 1994). Instrumental dexterity and harmonic imagination turn brief songs like "Couch," "Lactose Adept," and "Black Suit" into manifestos of a new genre.

Frisbie (Cargo, 1995) was more progressive than punk. The band played its songs with the seriousness of a jazz combo, although the songs maintained their frantic and angry identity. The album is still a machine-gun defile of short songs, but the lengthy "Going Steady with the Limes" seemed to open new horizons. Instead, the band dissolved.

Rob Crow recorded the lo-fi Lactose Adept (Cargo, 1996) along the same style and then Spotlight on Optiganally Yours (Cargo, 1997), a bizarre experiment with a keyboard called "optigan" in collaboration with Pea Hix. The two would give it a follow-up with Presents Exclusively Talentmaker (Absolutely Kosher, 2000), occasionally pop ("Held"), but more often atmospheric ("Song for America"), with winks at newage music (the sounds of nature on "Oar") and Morricone soundtracks ("The Last Ride of the Pony Express").

In between, Crow formed the acoustic trio Thingy with another Vegetable veteran, singer Eléa Tenuta. The EP Staring Contest (Headhunter, 1996) contains a handful of wonderful ditties like "Pony" and "Cutest Baby," and the album Songs about Angels, Evil, and Running Around on Fire (Cargo, 1997) contains 24 brief tunes, including the anthemic "Destroy All Music," the childish madness of "Half Japanese" wed to the melancholy soulfulness of "Young Marble Giants."