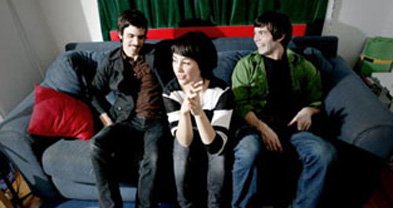 A trio with a penchant for skinny headbands and a fiercely rockin’ front-woman, Grand Ole Party originally formed around riot grrrl vocals by drummer Kristin Gundred, a Castro Valley native who played a 1969 Slingerland drum kit and studied classical and jazz voice. Gundred sang in choirs during high school and college, and holds a degree in modern literary studies.

The band’s first public gig was opening for the UV Tigers at a sold-out Casbah show. They’re gathering serious buzz as one of the hottest new local bands, so much so that they've quit their day jobs (Gundred worked at a second-hand clothes shop, Labno at a coffee shop, and Krechnyak was employed by a plumbing company).

In 2005, Grand Ole Party was signed to the management company 3D, which also manages Interpol and Coldplay. The group was nominated for “Best New Artist” at the 2006 San Diego Music Awards. In August 2007, singer/drummer Kristin Gundred joined Rilo Kiley to sing backup vocals on their European tour, and also appeared with that band on Conan O’Brian’s TV show.

The band’s September 2007 album Humanimals, produced by Blake Sennett (of Rilo Kiley and the Elected), was recorded over a five-day stretch. With cover art by local illustrator Kelsey Brookes, the album was released exclusively on iTunes with the bonus track “Shot in the Alley”; the band also sells the CDs at their concerts.

On February 7, 2008, the group was the “Artist of the Day” on Spin magazine’s website. The group has appeared at showcases such as South by Southwest, Bonnaroo, and Coachella. In September '08, Humanimals, won Best Alternative Album at the San Diego Music Awards, where many in the audience were seen sporting their own skinny headbands, marking an emerging local fashion trend that the band will someday be either lauded or cursed for.

2009 found the band touring with the Yeah Yeah Yeahs and recording a sophomore album with Gnarls Barkley producer Ben H. Allen. However, as of September 2009, it appears the band has split, with John Paul Labno now in a new band called the Hot Moon.

Kristin Gundred - who is married to Brandon Welchez of the Crocodiles - moved to L.A. in early 2009, where she co-founded the Dum Dum Girls.

In 2011, their unreleased second album Under Our Skin was finally made available from DH Records. Recorded in 2009, before the band split, a free download of the song “All Night” was posted at grandolepartymusic.com.