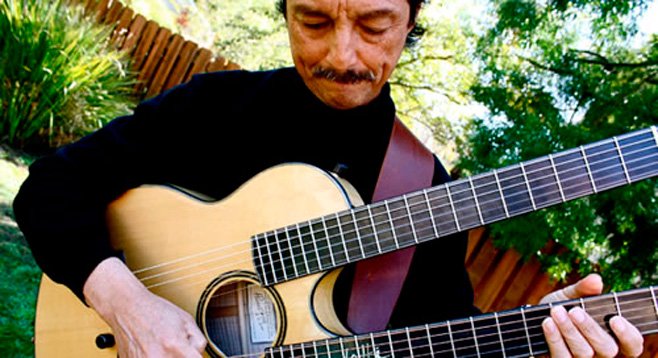 Born Fred Masataka Benedetti in Sasebo, Japan (“I would love to use my middle name as a stage name, but I think it’s a little too late to do that now”), Fred Benedetti began playing the guitar at age nine. In 1986, he was one of twelve guitarists chosen worldwide to perform in the Master Class of Andrés Segovia at USC, where Guitarra Magazine wrote, "Fred Benedetti amazed the audience with his performance of the Bach Chaconne."

He says his music career wasn’t exactly an overnight success. “We used to play for tips in Balboa Park when I was in high school, [and] I used to play for tips at the Prophet vegetarian restaurant when I was in college and had to ride to school on my bicycle with my guitar strapped to a backpack frame because I couldn’t pay for gasoline. I really never had it that bad, though, because my parents always gave me a roof over my head. I by no means grew up privileged, so I did learn how to manage my money and that helped me a lot later on in life. Whether playing or teaching, music is the only way I have ever made a living.”

Benedetti has performed locally with the San Diego Symphony, the San Diego Opera, the Starlight Opera, the American Ballet Company, the Old Globe Theatre, and with Luciano Pavarotti. As of 2009, he is a full-time professor of music at Grossmont College, where he is chair of guitar studies, and is head of the guitar faculty at San Diego State University with George Svoboda, Robert Wetzel, and Celin Romero.

In addition, he has recorded on the SBE label and Domo Records with several ensembles: Camarada (chamber ensemble), Keltik Kharma (a celtic band), the Odeum Guitar Duo, and the Benedetti/Svoboda Guitar Duo. His album The Guitar Ensemble II includes performances of compositions by Beethoven, Vivaldi, Strauss, and Mozart.

He has performed for dignitaries such as the king & queen of Malaysia, Mikhail Gorbachev, and President Jimmy Carter.