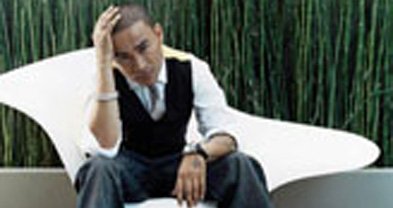 “There’s a backlash because I sing in English now,” says Frankie J, who was born in Mexico and raised in San Diego. His 2003 debut, What’s a Man To Do? featured the hit “Don’t Wanna Try.” His second English-language album, the RIAA platinum-certified The One, was released in late March 2005, hitting #3 on Billboard’s R&B albums chart. Its first single, “Obsession (No Es Amor),” featuring Latino rapper Baby Bash, hit #5 on Billboard’s Hot Latin Tracks and #4 on the Pop 100 Airplay charts. The song “How to Deal” was also a hit.

The singer, born Francisco Javier Bautista, spent four years with the Spanish-singing Los Kumbia Kings (where he was known as Cisko), led by A.B. Quintanilla, brother of murdered tejano pop star Selena. “I lost a lot of fans when I left that group [in 2003].... They say I should stick to my roots and call me a sellout [because I sing in English], but if you can do both languages, why not do both? Look at Ricky Martin coming out of [Spanish-singing] Menudo. Then there’s Jennifer Lopez and Fat Joe, who are Puerto Rican.... It’s a good time to get onto the Latino-English train and ride, ride, ride.”

His next single in winter 2005 was a remake of Extreme’s 1991 ballad “More than Words.” “I don’t think anyone’s ever done it in Spanish before,” he said at the time. “I’ll be doing an English version, too, but I really want to get back to my roots.... My next album will be all Spanish. We’re trying to get [a duet] going with Shakira.... I never met her, but I tried to hook up with her at a CD-signing in New York. I couldn’t get near her, but I put out the word to her people.”