Playing Tex-Mex covers and originals, drummer Chris Giorgio recalls “Billy and Pete [Conway, guitarist] had only recently graduated from St. Augustine High School in North Park. I myself [was] a recent transplant from Long Island and sporting my new Pig stage moniker Long Island Link. Just a three-piece outfit, featuring an old American Telecaster guitar, Kay upright bass, and vintage Ludwig drum kit...our monthly fanzine newsletter was appropriately titled ‘Slop,’ which humorously lent itself to both our band name and some of our earliest performances.”

By 1991, with the help of friend and mentor Mojo Nixon, they landed a record deal with Los Angeles-based indie label Triple X Records. They played locally at the Calypso, Mandolin Wind, PJ's, the Bacchanal, and elsewhere, as well as serving a lengthy residency ay Bodie's (until owner Harvey Bodie's lease was cancelled, anyway).

With two full length albums under their belt, they began to tour overseas playing to Americana hungry audiences in Belgium, Denmark, Finland, France, Germany, Ireland, Netherlands, Norway, Poland, Switzerland, Canada, and Mexico, thus expanding their fan base. The Pigs were playing over 250 shows a year at this point. They were a nonstop touring band taking an occasional break to record. Their numerous albums boast a list of “honorary Pigs” such as Joe Walsh, Michael Doucet, Dave Alvin, Evan Johns, Country Dick Montana, Mojo Nixon, Buddy Blue, Chris Gaffney, Wade Preston, John “Juke” Logan, and Candye Kane. Drummer Stinky (the Rugburns, Jewel) was in the Forbidden Pigs from 1987 through 1991, and guitarist Mike Hebert was a member from the '80s until around 1991.

In 1998 founder, singer/songwriter, bassist and front man, Billy Bacon (W. Seth Russell) was diagnosed with rheumatoid arthritis, but this did not affect his ability to continue the rigorous touring schedule at first. By 2006, the condition had finally begun to worsen to the point that touring was no longer an option. The band was now only playing occasionally. Today, after several different treatments Billy is showing improvement in his condition. The band still plays from time to time in clubs and at festivals. There is no permanent lineup.

Former drummer Chris Giorgio moved on to co-found Hot Rod Lincoln and later launch a solo career as Jackslacks, beginning with his 2002 rockabilly album Rock & Roll Dinosaur, produced by Stray Cat Lee Rocker and featuring Billy Bacon. Giorgio still embraced his Forbidden roots on the 2013 Jackslacks EP Farm Jazz, released on the indie label Shield of Love and including the track “Don’t Mind Me.” “That song was actually co-written with my ex-Pig mate Billy Bacon, who unfortunately suffers from rheumatoid arthritis and is unable to gig much anymore,” says Giorgio. “It was cool to work with him again after so many years.”

In 2012, Bacon announced that a new Forbidden Pigs album was in the works. Their song “Are You Going Back There Tonight” was heard in the 2012 William Friedkin film Killer Joe, starring Mathew McConaughey.

A new album, High, Wide and Handsome, was released in August 2016. Bacon passed away in summer 2019.

These guys are awesome! Saw them last year, and they really won me over. Another good show is Saturday night, Latex Grenade at The Griffin!

You guys missed two great players a drummer named Stinky from the Rugburns/Steve Poltz/Jewel etc was in the Forbidden Pigs from 1987-1991 and the amazing guitarist Mike Hebert was in the band as well from the 80's until about 1991. 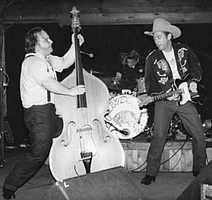