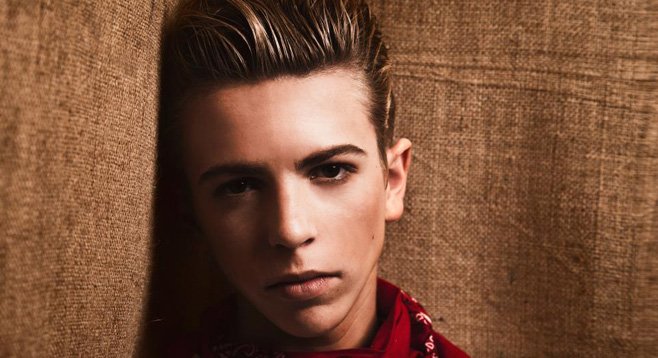 San Diego native Dylan Hyde was eight when he began appearing in theatrical productions with CYT, Christian Youth Theatre, having been influenced by his mother and grandfather, both of whom were involved in local theater.

Hyde was fifteen when his vocal talents launched him down the path to a career in pop music. Discovered in a Temecula musical theatre production by Richard Allen, he was signed to Chrissy Field Records in 2011.

His accomplishments are all the more impressive when one considers his disability. “My hearing impairment has affected my speech and made it hard for me to relate to others,” he says. “So, I’m relearning English. I’m learning words I heard incorrectly as a child that were not words at all.” He explains that the congenital issue was in both ears. “[Doctors] did the right one first, and it came out good. Then they did the left one, and something went wrong. It doesn’t work at all, but the right one works even better now.”

Hyde describes himself as a crooner. “I don’t know if I agree with rap. I prefer family music. Pop, that’s what I usually do. We call it classy pop.” In March 2012, the Santee resident earned some press for covering Justin Bieber songs in YouTube videos.

Does Hyde have his sights set on becoming the next Justin Bieber? “I would love that. That’s definitely what I’m pushing for.”

The tween pop singer’s summer 2012 California tour included a June 23 date at the San Diego County Fair in Del Mar, opening for American Idol Scotty McCreery. “We played to what they said was one of the biggest crowds ever. We were on the stage in front of the grandstand...people were right in front and all along the sides and around the big fountain.”

His debut album was released on the Chrissy Field label later that year, in October, with its first single “Love Is” issued in May 2012. Another single, “Love Never Ends,” was co-written by his best friend Zacariah. A summer 2012 tour was co-sponsored by Barnabas Clothing Company, with whom Hyde signed an endorsement deal.

On March 13, 2013, Hyde tweeted and Facebooked that he’d just gotten signed by not one but two major labels, Universal-Motown Records and Island/Def Jam Music Group, and all as a result of his new working relationship with Push Music Group, a Los Angeles production house. Push announced plans to release a Hyde EP the next day on YouTube.

“We’re releasing XO free,” Hyde said on the eve of the release. “I wanted my fans to hear my new sounds,” which he says are rooted in R&B. “I’ve got horns now,” a change, he says. His former label, Crissy Field, wanted him to work more of a pop angle. “But R&B is where I’ve wanted to be all the time. I can’t make it too old-school, or the kids my age won’t be into it.”