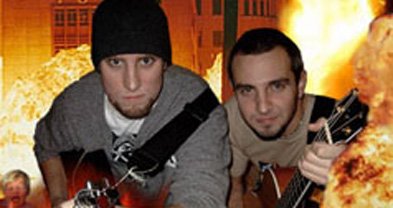 “Growing up in upstate New York,” says Tim Curns - one half of the Dateless Losers - “Gabe [Lander] and I looked to the west to find a solution to our humdrum existence.… I followed Gabe out to Southern California after hearing how much fun he was having in Tijuana. I came out with the intention that we would start a full band and become the next Radiohead, and then realized that we were complete nobodies who had no car, no money, and no women.”

“Despite all of this, we kept playing our guitars at open mikes and for friends, until we discovered that juxtaposing congruent-sounding songs seemed to wake up the audience to sing along and drink copious amounts of beer. We kept on doing that, and it has morphed into a techno/audio/visual/metal nightmare that we refuse to let people wake up from. Keep in mind that we are still nobodies with no money, though.”

In 2005, Curns was flown to New York to audition for a slot in the Blue Man franchise. “I sent in my résumé,” says Curns, “and the next day they called me up to L.A. for an audition. Since they didn't want me to have to go all the way back up again, I also had my callback the same day.”

He was sent back home to Pacific Beach. “I still have the photos of me in the whole Blue Man makeup and costume, but I don't look at them because they make me mad,” he says.

The Losers have had their share of rugged gigs. “When we were first starting out,” says Lander, “we played at an open mic where Tim and I both had to share one microphone. We had to sit so close, we both forgot all the words to our songs. By the end of the most awful set ever, Tim was covered in my spit and our sense of dignity was utterly flattened. Luckily there were only, like, three people in the audience. And they weren't paying attention.”

Curns says “The worst gig was when some dude mooned us, spat at us, and then wanted to fight us because we dedicated 'The Vagina Song' to him. Wait, that should be our best gig.”