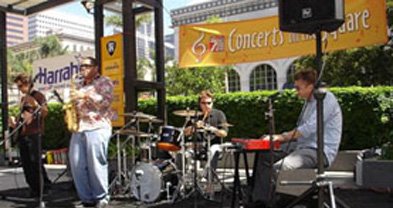 Current Status: Playing around town and some out-of-state tours.

Crash Carter was formed in North County in late 2004, pairing drummer John Mears and bassist Jeff Bowman (both formerly of surf rockers Tower 7) with singer/keyboardist Casey Gee. "We're just three groove-oriented guys trying to sound like Stevie Wonder meets the Police meets the Greyboy Allstars," says Gee. "The name comes from this mythical train conductor who supposedly got in a lot of accidents, but they couldn't fire him because he was in the union."

Their 2005 album Red Buttons Blink featured guest appearances by local players Michael Tiernan and Sven-Erik Seaholm (who coproduced). Switchfoot front man Jon Foreman was supposed to contribute but ended up being out of the country during recording. The Switchfoot connection goes back to Gee's childhood friendship with Foreman, with whom Gee cowrote the Switchfoot song "Underwater" (heard on Dawson's Creek). Gee and John Mears also played together in a turn-of-the-century band called Phobicman alongside Switchfoot's touring keyboardist Ryan Fisher.