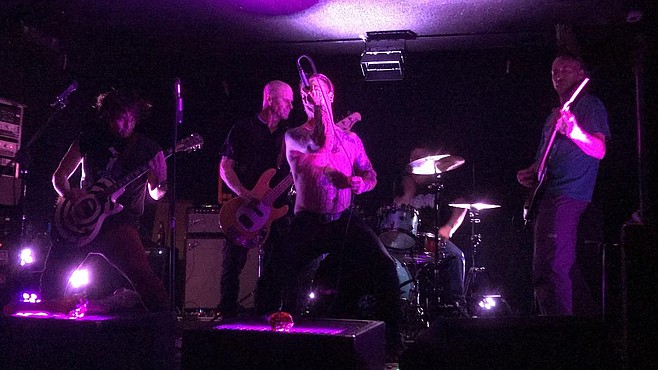 Influences: Cardiac Kidz, the Ramones, the Clash, the Cult

Orff says North County bar Boar Cross’n has banned the band for life, after a contentios November 2012 show. “We were told we had a 45-minute set. After we loaded our gear, the sound guy told us we had to cut it to 30 minutes. And then 15 minutes in, he told us we only had one more song.” This is when Orff left the stage.

“I jumped into the audience and took off my pants.” He says he did it to “piss off the sound guy.” It did. Orff was ejected from the club. Power to Coda Reactor’s gear was cut and the lights were dimmed. “The sound guy came up to the stage and he shook his head. And then the bouncers surrounded me.”

Orff takes the ban in stride. “I don’t think we’re gonna be playing anywhere in North County anymore. It’s not really our thing up there. We did get away with the one-headlight thing, though.”