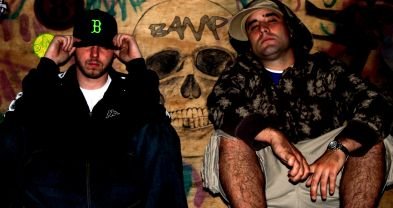 “I was brought to San Diego via the hand of the judicial system,” says Chris. “When I was in seventh grade, a kid moved to town who wrote [graffiti] for T.i.t.s. Krew, one of the largest graffiti krews in California."

“I learned the ABCs, literally, about the graffiti game from him. I started getting in trouble in and outside of school. I was suspended on a few occasions for fighting, suspicion of vandalism, [and] I did time in juvenile hall for being truant and got arrested for fights and shoplifting.”

Chris says he was expelled from S.L.O. High. “[It was] for a fight, [for] which my parents had to pay over ten thousand dollars’ restitution to the victim’s family. My parents decided I was too much and declared me a ward of the state, and I was placed in foster care until I turned 18."

“Music kind of got me through a lot of the shit I was dealing with. It was an outlet for me when I was in jail. I moved to San Diego as soon as I was free from any legal obligations in San Luis Obispo. I had pretty much quit graffiti altogether, at least on walls. I kept it to paper and canvas but would still go out and bomb on occasion. I inevitably picked up an assault charge with personal use of a deadly weapon, not more than a year after landing in S.D.”

“With time served,” he says, “I spent about 11 months away and have been dealing with probation for the past five years.”

Clay Pigeons formed after he met Jimmy Powers in early 2007.