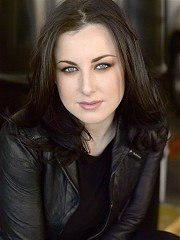 Dublin-born Irish songstress Carly Smithson is a singer who first came to national attention as a top-10 American Idol contestant in 2008. At the time, she was a bartender at Gaslamp’s Field Irish Pub and Restaurant on Fifth Avenue, where she'd been for around three years, and her husband (seen with her sometimes on American Idol) ran a nearby tattoo parlor, Nothing Sacred.

Though Smithson was eliminated from the show in late April ’08, sales of her failed 2001 album, Ultimate High, exploded: the same week she was booted from the TV show, Amazon had it ranked at number 15 in MP3 album sales.

According to a 2002 article in the Wall Street Journal, MCA Records invested $2.2 million in Ultimate High; in the first three months, it sold 378 copies. After the flop and an eventual move from the L.A. area, she went to work as a waitress at the Field.

Votefortheworst.com has pointed out some discrepancies in Carly’s accounts of her past. She has stated that her record label “imploded,” but MCA did not fall apart; it merged with Geffen in 2003. Under the Geffen banner, a number of former MCA acts — including the Roots, blink-182, and Mary J. Blige — continued to record. The website suggests Smithson may have made it onto the show through nepotism, as Idol co-host Randy Jackson was MCA’s vice president of A&R in 2001.

After being voted off AI, Smithson embarked on a 53-city summer Idol tour, even though Idol's co-production company 19 Management declined to offer her a recording contract.

She relocated to Los Angeles, and hired an agent, Arthur Spivak, entertainment manager for Tori Amos and others. After securing a record deal, she began working on songs with songwriter/producer Chris DeStefano.

In summer 2009, Smithson joined the Fallen, a band featuring three former members of goth rockers Evanescence. In 2011, she was cast in Cirque du Soleil’s Viva Elvis show in Las Vegas, in which she sang two songs during each performance through Autumn.