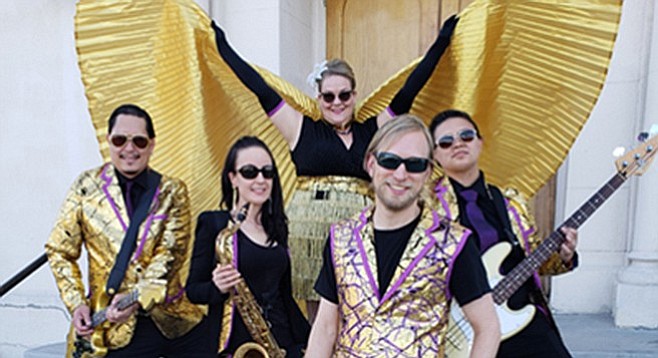 Connell used to play trumpet in the Optionals, Riot City, and Kamikaze Harry back home in Australia. She writes all the lyrics and melodies for the Babydoll Warriors. “All of our songs have the word ‘baby’ in them.” She says their first record of all-original baby songs is planned for release later this year.

“Space Love, Baby” is about making love in outer space. “Love Bite, Baby” is a one-song, low-budget rock opera about a werewolf. “Baby, Shake Your Golden Caboose” is about love on a train: Well the sleeping car is empty/ Step inside and latch the door/ It’s time to stoke the furnace/ While I yell all aboard.

Babydoll Warriors played their first gig on July 23, 2018, at Bar Pink. AudioScope Radio filmed a 360 virtual reality video of the band playing a show at Bar Pink that December. By that time, they'd already racked up some typical band experiences. "Our worst show was a private party at the Bali Hai," Emily Connell told the Reader. "Let’s just say our style of music was definitely not what the crowd was looking for that night. The audience were lured outside by a beautiful sunset and mai tais at the exact time we started playing, and lured back inside after our set when the DJ started playing 'Baby Got Back.'"

Their Love Bite, Baby EP debuted in February the following year, released digitally (on Spotify, iTunes, Amazon Music, etc), and also as a limited edition heart shaped USB drive which can be worn as a necklace or used as a keyring. As for the EP cover, "We thought it would be funny to have a photo of us standing on a record player for a digital only release," says Emily Connell.

The band was nominated for a 2019 SDMA award in the Best New Artist category. "This is an extra special achievement for us," says Connell, "since our drummer had only started drumming six months before our first show, and our bassist had never played bass, and it's also the first rock 'n' roll band our singer has been in."