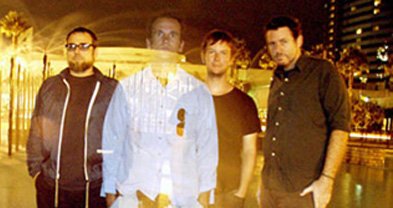 Current Status: Still around and occasionally performing. Rob Crow's Robcore label is preparing to release <em>Come with Me If You Want to Live</em> from his band Goblin Cock (he also plays in Other Men), as well as new records by Optiganally Yours (Crow's band with Pea Hicks) and Aspects of Physics.

Aspects of Physics is an instrumental experimental band. It was formed in 2000 by ex-members of the enigmatic math rock band Physics. Founding members Jason Soares, Jeff "Robot" Coad, and Thatcher Orbitashi released their debut album Systems of Social Recalibration on July 2, 2002.

Thatcher Orbitashi has since left the band, and Aspects of Physics has added Rob Crow on guitars and Brent Asbury on drums.

Their second album, Marginalized Information Forms 1: Ping, the first in a three part series, was released on October 5, 2004.

As a staple of the local electronic music scene, Aspects of Physics has been nominated in the Best Electronic category at the San Diego Music Awards every year, 2002-2006. The band's popularity has expanded well beyond San Diego, and they've embarked on North American tours with such notable bands as Album Leaf, Pinback, Mates of State, and Plastiq Phantom.