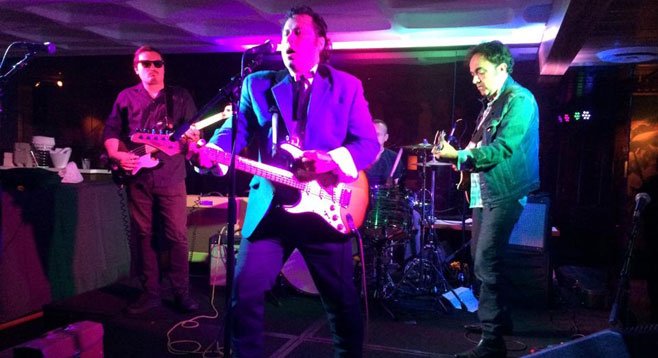 Action Andy & the Hi-Tones includes frontman Action Andy Rasmussen (the Bomboras, the Sleepwalkers), backed at various times by players like bassist Tom Ward (Nashville Ramblers, Gravedigger V), guitarist Xavier Anaya (the Trebels, the Hoods), drummer Skid Roper (Mojo Nixon, the Evasions), and others. What might have been a studio-only combo took a turn for the serious when Rasmussen was asked to perform at his brother-in-laws wedding, creating a need for this warm up show.

The group made its live public debut June 18, 2011, at Eleven, performing a semi-acoustic mix of honky tonk country, fifties vintage rock ‘n’ roll, and smokin’ blues, with Roper playing cocktail drums with brushes. “I don’t have a roadmap in my head where the music is going,” he says.

“People have said before that my songs sound like old black and white movies,” according to Rasmussen. “I hope to maintain some of that old time charm.”

Later in 2011, Rasmussen began recording a new album called High and Lonesome at Earthling Studios, released by Relampago-go Records under the band name Action Andy & the Hi-Tones in 2013 and containing “All original music, with a storyline to thread between the songs,” according to Rasmussen.

An electrifying blend of Americana and alt-country styles, High and Lonesome shifts into straight ahead rock & roll, a touch of Latin, and minor key moves. Part concept album, it tells the tale of a man's search for Love and Redemption, with the pitfalls, perils, and trials that occur along the way.

The album was re-released in March 2014, in a red vinyl edition limited to 300 copies and featuring a bonus track, a revved up/rockabilly up version of the Seeds song “Pushin' Too Hard.”

Spring 2016 found the band backing up Tex-Mex legend Augie Meyers on several southern CA dates (including April 30 at Kensington Club), with guest drummer Bob Osuna (the Sleepwalkers) in place of Victor Penalosa, then on tour with the Flamin' Groovies.

The Hi-Tones vinyl EP Songs 4 Swingin' Sinners was released via Relampago-Go Records in early 2017. The release party on February 18 at the Black Cat was bassist Jeremiah Silva's last show with the band.

The Album "High & Lonesome" was just released, check their website