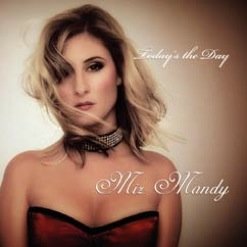 Pop singer, Miz Mandy, and label BabyLove Records announced the release of her sophomore album 'Today's the Day'. "We did a soft release in December for presales to the fan club," Miz Mandy states, "(and) now that it's through the distribution channels, we are officially releasing it to the general public." It is now available on iTunes, cdfreedom, Napster, Livewire, Groupie Tunes, eMusic, and Rhapsody. http://www.MizMandy.com

The original album, mainly co-written with Patricio Pickslay of Rhythm Coalition Studios in Cardiff, California, is "a fun whirlwind of the extremes. On one hand, there is love, lust and passion and on the other self-loathing. There are funny songs, spiritually awakening songs, and flirtatious party songs." She says.

"As Mandy's collaborator/producer, I'm intimately involved in many of the aspects of the creative process. I really appreciate Mandy's dedication to the music," States Pat. "She always inspires me to get out of my comfort zone and try new things in the studio. She's in essence, evolved into a co-producer with great production instincts." http://www.atriplethreat.com

As early as May of 2008, Miz Mandy released a single with Rhythm Coalition Productions, Nodden, Blue Pro Productions, Schrapnel Apparel, Hollywood Nights Promotions and BabyLove Records. "Press play and the first sound you hear is a vintage synth looping an addictive riff. In the moments that follow a rock singer offers a quiet apology, a chart topping dance star delivers an infectious chorus and an underground rapper tops it off with a mesmerizing verse. The song, 'Just Another Night' contains the most unlikely of trios and yet the electronica-based dance inducing beat at its core glues it together seamlessly. Written and produced by Nodden, "Just Another Night" features dance artist Miz Mandy and rapper J. Mac," wrote music reviewer Ben Jeffries.

Co-writer and producer Nodden: "It was an honor to work with such an established and talented artist right off the bat. She came in and killed it on the first take." http://www.nodden.com

"It's hella del fuego, SoCal San Diego", states rapper J.Mac, who enjoyed working with Miz Mandy. "Mandy is real motivated and knows what she wants. Working with her has opened my eyes to a whole new genre of music. Performing with her was the same way - I saw how much preparation and work goes into her shows, and the end result is beautiful. I had a great time."

'Just Another Night' was awarded a finalist spot in the 'Best of' San Diego Magazine competition. Miz Mandy, J.Mac and DJ Mission performed at the San Diego Magazine event, the biggest in the magazine's 60-year existence, with featured artists Bushwalla and Steph Johnson.

The second single from the album, 'Sweet Fury of Love (Friscia & Lamboy Back 2 Soul Radio Mix)', released months before the album was finished, has already hit Billboard status. Friscia and Lamboy remixed 'Sweet Fury of Love' into a "Tribal/Progressive [and] a House/Club Mix" and it entered onto the Billboard Breakout charts on July 4th, 2008. In September it hit #48 on the Hot Dance Club Play Top 50 Billboard Charts. (Issue date 9.27)www.myspace.com/frisciaandlamboy

"I was real impressed with the record. I felt the ride from the beginning to the end. The way it starts gets me every time." J.Mac refers to the single now being pushed by BabyLove Records through her first music video, 'Let Love Be Free'. "I had the privilege to hear the beat before the song was done. Nodden and myself both said, yup, that's dope."

The music video for 'Let Love Be Free' was recently filmed in San Diego with a production crew consisting of those who have worked for MTV, BET, VH1, Mariah Carey, T.I., and Playstation. Director Frank Rice: "The song really stood out to me, hence the reason my wanting to make the video. It's very commercial and catchy, and is what the music game is all about now." He said. The video will be officially released on February 27th, 2009 at Universal Hillcrest.

Other titles on the album include 'Detox', 'Lovebug', 'Discotheque Emergency' and 'Filthy Stinking Rich'.