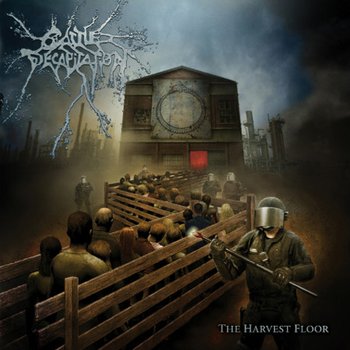 The drum tracks for "The Harvest Floor" were laid down with Zach Ohren (ALL SHALL PERISH, DECREPIT BIRTH) before the rest of the instruments were recorded and the entire thing was mixed with producer Billy Anderson (MR. BUNGLE, MELVINS, SWANS) at Sharkbite studios in Oakland, California.

According to the group, "Sonically, the band has managed to finally capture and accentuate its live intensity that we've become known for and has created one hell of an album from start to epic finish! Conceptually, its misanthropy shall go unmatched. This is it, humans... ferocity at its finest."

Regarding the album title and packaging, the band states, "The actual title refers to the area of a slaughterhouse where the animal (of course in our case it always means the HUMAN) begins the agonizing process of death, usually done with a bolt to the forehead or a slice to the throat. 'The Harvest Floor' is a fitting title for an album laden in gore and the anti-human metaphors and sentiments CATTLE DECAPITATION fans have grown to know and love."

Artwork by Wes Benscoter shows the outside of a large slaughterhouse/factory of doom and gloom with the general public being herded inside to meet their demise.

The inside of the album layout reveals what's really inside that slaughterhouse: our misanthropic heroes of GORE (not core) at another hard day of work! Combined with the amazing artwork and conceptually brutal layout, 'The Harvest Floor' also contains an enhanced portion which sports an iPod-ready documentary about the album.