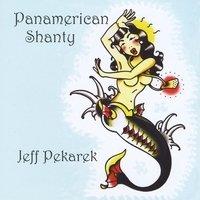 Pekarek’s 2010 album Panamerican Shanty uses traditional sea shanties and film noire-inspired originals to tell the story of the Nakai Nakai, a fabled whale-tooth scrimshaw piece. Poetry and narration, partly in Spanish, give the perspectives of a tango dancer, a late-night disc jockey, a private eye, and various mariners, while the singing of a chorus of rum-lit sailors provides an abstract commentary.

The instrumental palette is also unique: string bass is the main color in this opus, joined by bouzouki, drums, and trumpets. Piano and guitar are used sparingly, while antique bongos and Irish whistle add some culturally specific hues. Sounds of marine animals (mainly humpback whales, seagulls, and sea lions) are integrated into some of the pieces.

As music, this album is a unique combination of sea shanties and original fifties-style jazz. The sea shanty, a type of folk music which flourished in the nineteenth century, is itself a hybrid. On merchant
ships, West African work songs blended with British and Irish melodies and verses, forming a rich tradition which gradually died out, as steam power and electricity reduced the need for coordinated group muscle. The album's nine sea shanties are arranged by Pekarek in a style reminiscent of British folk rock bands of the late 1970s, such as Steeleye Span and Fairport Convention. These pieces are connected by original music which recalls the abstract, sparse tension of film noire scores and exotica
LPs.