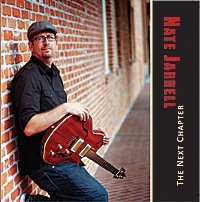 Recorded at Dirty Boulevard studio in San Diego, the disc was engineered and mixed by saxophonist Ian Tordella.

The Next Chapter is an excellent example of modern electric jazz guitar, which, in it's best moments, veers slightly to the left of center.

Jarrell has a fluid command of the instrument, possessing a highly melodic legato style that emphasizes clean, (usually), orbital phrasing. He appears to have absorbed some of the influences of John Scofield and Kurt Rosenwinkel, and from a harmonic standpoint, there are similarities to the under-sung Steve Khan in his playing.

The CD begins with an intense and intricate free-bop theme, "Passage Of Time" written by saxophonist Peter August. On this one, the Scofield influence is emphatic--especially in terms of timbre--Jarrell's tone is overdriven and distorted--making him sound even more horn-like, perhaps in his phrasing, but sacrificing some nuance as well. The guitar solo is full of elliptical and chromatic sequences that flirt around the edges of true dissonance. It's very exciting and sets up the composer's tenor solo well. August races through and around the melodic contours with a highly individualistic tone--he's a guy to watch for.

Thankfully, Jarrell drops the distortion on the rest of the album. On the next tune, "The Turtles Are Racing Tonight," he weaves melodic curlicues around the implied harmony of sure-fingered bassist Harley Magsino who takes an excellent solo himself, complete with his big, woody tone and the ability to layer one cool idea after another.

Jarrell's composition, "Molly" is a pensive modal theme that features a singing guitar spot and a sensitive Rhodes solo from guest pianist Ed Kornhauser. "Molly," is a melodic gem that should make it's namesake proud.

Thelonious Monk's, "Bemsha Swing," is given an appropriately off-kilter arrangement with stuttering drum commentary from Jeanette Kangas who is excellent throughout this album. August, Jarrell and Korhauser all sneak in wicked, off-center statements on the lurching theme.

The title tune, "The Next Chapter" is another Jarrell original, and it's off to the races with this exhilarating balls-out swing fest of twisted ideas.

Jarrell gets in his best solo here with inspired, outward-bound fragments that come cascading off of his fingerboard. August and Kornhauser deliver intricate variations on the theme over the Magsino's relentless walking and the pinpoint ride cymbal pings of Kangas.