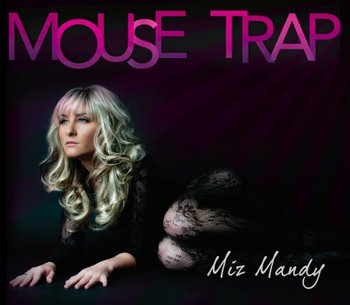 In 2010, Miz Mandy partnered with Ryan Franks to cowrite and produce ten original songs for Mousetrap, her third album. “I think that I have grown as an artist, and that this new album
will challenge people musically and lyrically,” Miz Mandy says. “It’s very different from my past albums, but I think people will love it.”

Her first two albums, In The Mix, and Today’s the Dayincluded two Billboard charting singles "In the Mix" and ‘Sweet Fury of Love."

Ryan Franks, who graduated from the University of Colorado with a Bachelor’s of Music and now lives in Los Angeles, met Miz Mandy through a mutual business contact last fall and work on the album began in
November of 2010. “’Queer the Pitch’ was the first track Mandy sent me lyrics for and was the first song to go into production. I am a sucker for colloquialisms.”

“From the start, we were on the same page,” Mandy says. “But some of the original song ideas didn’t make it. Ryan is incredibly talented. He really challenged me to be a better writer. I learned a lot from him.”

Miz Mandy, who writes under her legal name Amanda Kate, wrote most of the lyrics on the album. “This album is deeper and grittier than I have ever written. It’s really no holds barred. There are feelings and
stories so wrapped up, that you really have to pay attention to understand. It plays hard to get,” she winks.

Most of the lyrical writing happened in San Diego, but the composing, production and recording occurred in Los Angeles at Pendulum Studios.

“There was an intentionally retro-futuristic approach to the sound; harmony and melody pulled from old French Noir sounds like Francois De Roubaix mashed up with some 9-Inch Nails production; and some
inescapable nods to my heroes from Tom Waits to Danny Elfman to Beck, Dvorak and Mike Patton.”

The individual tracks range from ballad material like "Washed Up" and "Diesel" with a lilting dark lullaby
sound; to aggressive driving tracks like "Vertigo" and "Paper Tiger."

Ryan states on Pendulummusic.net, “Overall, it feels cohesively different… it has a different sound, but it’s consistent within itself.” The songs are large orchestrations, at times utilizing over a 100 tracks in a single song to create layered textures.

Ryan continues, “The production itself was extraordinarily labor intensive. The fusing of dirty, trashed out synth parts, lush strings, heavy grooves and some cool twists and turns in the vocals has created a different sound. It’s a little retro, a little film score, a little sleazy, and a little mean.“

Franks recorded instruments ranging from a dobro to a glockenspiel to accomplish the sound. Also used were lap harp, bass clarinet, baritone saxophone and prepared piano.

“Some of the tracks exposed themselves easily and others took awhile to evolve, like ‘Rising Sun’,” Mandy says. “And the vocals were a whole other animal,” Ryan explains, ”I really tried to treat the vocal as another instrument. I cut things up and re-sampled them and distorted, bent, [and] stretched.”

The vocals were recorded over two full days. “This was a bit of a new singing approach for me where I was singing softly as opposed to belting it out.” Mandy adds, “Trying to be comfortable with the melodies and harmonies all at once was pressure, and recording all of the parts in only two full days was
tiring. I was hoarse.”

The production concluded in July of 2011. “We all had different ideas on how the mix should sound; how much compression, and where all of the instruments should sit.”

Mandy says. “So we have taken our time to really dive in and get it right.”

A third party in Los Angeles mixed the album. “Now that the project has come to a close, it’s great to sit back
and hear what it became through the mix process… to hear the instruments now occupying their own individual spaces in places and to hear the pumping walls of noise in others. It ended up maintaining a good dynamic range and has a lot of color to it.” Ryan says.

Mandy and Ryan both feel like MouseTrap has a strong film score quality to it, and hope to accomplish some synch licensing contracts. Ryan wishes, “I hope that the album impacts some as those albums important in my life have impacted me. And I want to make a million dollars. Fingers crossed.”