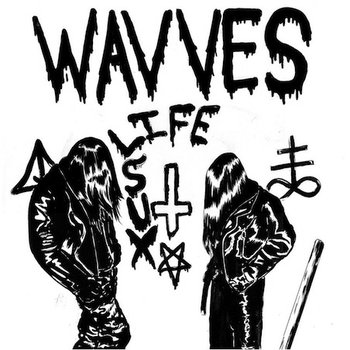 Wavves follow up their 2010 skuzz-pop masterstroke King of the Beach with Life Sux, the debut release from singer Nathan Williams' Ghost Ramp label. If the band's previous records were all about one man's self-loathing, this six-song EP takes that sentiment and generously expands it outward, telling the tale of two loathsome characters locked down in Bummertown. What follows is a downward spiral of wrecked cars, impossible dreams and fading faith set to pop-damaged punk and squalling grunge, and featuring collaborations with musical BFFs Best Coast and Fucked Up. Also, it's fucking fun, though in Williams' words, "If you hate yourself and other people, you might like our record."

Williams has come a long way from his parents' San Diego pool house, where Wavves was born during a jobless bout in 2008. A series of small-run 7-inches and tapes paved the way to the buzz-building self- titled and semi-self-titled LPs Wavves (Woodsist, 2008) and Wavvves (Fat Possum, 2009). Both were praised for their inimitable brand of experimental surf skronk and lo-fi loser anthems, notably swathed in pot smoke and isolation. King of the Beach, recorded in Mississippi with producer Dennis Herring (Animal Collective, Modest Mouse), kept that blessed spirit alive but displayed a set of fuzzed up, fleshed out confections, and found Wavves expanded to a ripping trio, including current bassist Stephen Pope.

Produced by the band and recorded at Infrasonic Sound in nearby Alhambra, Life Sux picks up where the last album left off: at that rare intersection where form meets friction. Opener "Bug" is an upbeat bomb lobbed at any enemies of fun-a thesis statement driven by Dino Jr. guitars and a pop-punk bass line. The blisteringly bright "I Wanna Be Dave Grohl" offers an arena-sized appeal to everyman excellence, while "Nodding Off" finds that escape fantasy failing even as Best Coast's Bethany Cosentino coos sweetly over the encroaching grime. "Poor Lenore" is heavier and darker, awash in wasteland riffage àla Nirvana, and "Destroy" is severe, with Fucked Up and Wavves teaming up to thrash in vain against a
crushing apathy.

Life Sux closes with "In the Sand," a longtime touring favorite recorded live at Black Iris Music in L.A. with drummer Jacob Cooper. Surfy, smashy and brash, the song is a fitting finale and despite itself, offers up a near moral before careening into silence. After establishing his ennui, Williams offers up faintly glimmering hope in the midst of inertia: "Do what you wanted to do / It's all up to you." Fittingly, the launch of Ghost Ramp embodies this slacker-made-good philosophy. Working with other people's labels was a means to an end. Finished with the red tape, false promises and general bogusness, Wavves is now a movement unto itself, going direct to fans and friends everywhere.