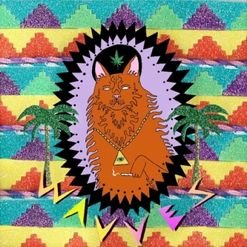 King of the Beach

Noise-pop trio Wavves deshackulates above the critic-infested waters of popular music. “You're never gonna stop me!” resounds San Diego native Nathan Williams on the title track, a single-finger salute to those who dismissed Wavves’ debut as a fuzzed-out, cursory experiment.

Taking Williams’s on- and off-stage antics into account, including a canceled European tour (complete with hurled shoes, fistfights, and broken bottles), admitted substance indulgence, and subsequent public meltdown, it looked as if his righteous ride was over. But Wavves did what nobody expected: scrubbed up the chops, expanded to a trio, and traveled to Mississippi to record the promising new album.

On lead single “Post Acid,” Williams admits, “understand...that I'm just having fun.” This drugged-out, beach-slack mentality prevails throughout the collection, but it's perfect for the heat and haze of Cali summer days.