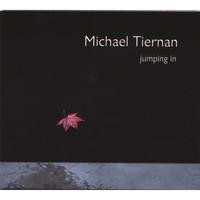 This time around, the Del Mar-based one-man act has revamped his mellow acoustic sound with the addition of a few jangle-pop melodies. Tiernan incorporates folk, rock, and bluegrass in 12 tracks that are all performed acoustically. The musicianship on the album is flawless, and the high production quality makes for a fairly slick commercial recording despite the unassuming backdrop of homey acoustics.

"Pass on By" and "Jumping In" showcase Tiernan's vocal range and knack for imbuing tracks with soulful grooves. The tenth cut, "The Day I Tried to Live" is a cover of Soundgarden's hit. Though heavier on the acoustics and sentimentality in this version, Chris Cornell's rendition is stronger."

"And it's who I am that makes me want you/ And it's what I lack that makes me need you/ I don't give a damn if I can't feel you/ 'Cause I love you." Though Tiernan's lyrics are optimistically grandiose on a few songs, the excellent folk-soul tracks leave the greater impression. Whether folk, country, or pop, each composition features an accessible, simple melody.