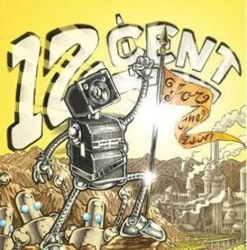 In a genre based on pissing people off, 12 Cent takes it one step further. Dig around for reviews of 12 Cent on punk message boards and you’ll see a lot of references to “mall punk,” “Cali-core,” and “crap.” The “punkier than thou” crowd disapproves of the band’s recent inclusion of a piano and harmonized vocals.

12 Cent’s collision of rough three-chord rock with twangy, sometimes honky-tonk piano feels almost illegal and blasphemous, which is of course what punk is about. Their Boston accents and raucous shouting brings a party mood. Eleven rip-tearing tracks totaling 28 aggressive minutes (filled with imagery of beer, sex, and stinky couches) agitates even the worst of attention deficits.

The DIY production includes screw-ups, outtakes, and recordings of bar crowds drunkenly chanting (some loving accords, some hateful epithets), which is punk perfection…someone should tell the “hardcores” that it’s not about holding hands and agreeing.