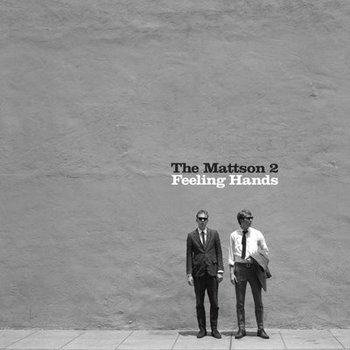 The musical journey that is the Mattson 2 has culminated with the release of their latest album, Feeling Hands. After two years of touring, writing and collaborating, both Jonathan (drums) and Jared (guitar/bass) have created a record that celebrates the sounds and visions of a band hitting their collective stride at precisely the right moment.

Steeped in a breezy jazz brilliance and the swagger of surf and sun, Feeling Hands is an open invitation to an uncharted destination of artistry. Perhaps what’s most remarkable about Feeling Hands is the journey it creates for the listener, incorporating numerous influences throughout both the music and recording process. Moreover, it’s the uncanny ability of a duo to create a vintage sound that can champion the riffs of Dick Dale while triggering the confidence of Morrissey and the swoon of Chet Baker.

Working with Thomas Cambell and recording engineer Monte Vallier, the Mattsons have created a record that defies genre, emphasizing the evolution of their sound with new experiments in overdubbing, instrumentation and layering aesthetics. With a focus on orchestration and composition, Feeling Hands presents itself as a dynamic journey to the listener, providing a more mature sound that brings together elements of everything from jazz to new wave to punk to 1960s surf rock.

“Jared, Thomas, Monte and I put a lot of time into the sequence of the album,” says Jonathan of the process. “It was our goal with Thomas to create a record that takes you many different places.”

At times the listener is sprinkled with a shimmering guitar riff (“Mexican Synth”), and then around the corner hides a deft string orchestration (“Spaceman 2”) and a crooning Coltrane sax (“Ode to Lou”). The rhythmic elements of “Feeling Hands” are a vast collection of inspirations both past and present, triggering everything from post-punk daydreams (“Obvious Crutch”) to Gabor Szabo (“Pleasure Point”) to vintage 8mm surf parties (“Man From Anmnesis”).

Proving that no duo is an island, the Mattsons also enlisted the talents of Galaxia label-mates Ray Barbee and Tommy Guerrero to lay down a few riffs on tracks “Chi Nine” and “Give Inski’s.” Both of which add two more beautifully dynamic talents to the “Feeling Hands” melting pot, and, of course, continue the storied traditions of jazz collaboration.

“I think with Feeling Hands, it is a culmination of our growth in our relationship we have with Thomas,” concludes Jonathan. “It expresses this growth anywhere from the concise song writing and collaboration to the musical orchestration of the pieces to the subtle recording techniques used by Monte.”

The disc begins with the rockish "Pleasure Point," Jonathan's hi-hat driving Jared's reverb-drenched melody for a track that wouldn't be out of place in a surf movie. "Black Rain" is tremolo guitar chords over Farmer Dave Scher's haunting pedal steel, and the excellently arranged horn section.

"Ode To Lou" is really something else. Jared establishes a slinky, slurring melody, which the strings double on the bridge. Tom Griesser takes an excellent tenor saxophone solo, which seems to inspire Jared Mattson's own fleet fingered and blues inflected essay, easily his best on this disc, and one that places him in the direct lineage of six-string masters like Pat Metheny and John Abercrombie. "Ode To Lou" has many moods and is a highlight moment on this album.

Aakaash Israni plays contrabass on several cuts, and he fills out the bottom end with imaginative lines that stay in the background but add considerable gravity to the proceedings.

There's a dark cowpoke kind of theme to "Living Room" that reminds me of Bill Frisell doing a spaghetti -western soundtrack.

Finally, on "Man From Anamnesis", Jared Mattson leads off with sumptuously voiced chord swells that hang in the air like puffs of smoke--setting up a nice slow groove before Jonathan's insistent hi-hat takes it to another level. Another layer of mystery in the form of lush horns draw the tune down.