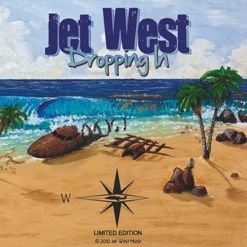 “The album title came to mind based on where our band is currently in the music industry,” says Chris Warner. “We understand that we are just 'Dropping In' with our debut album, just as we love to drop down waves from San Diego to Mexico. The cover art by Trevor Dawson is bhased on the notion that sometimes you want to Jet West and head somewhere closer to where the sun sets. In our album cover art, we portray this in an island setting.”

Light’s Out
Mexico
Better Than Me
Irie Eyes
Alone
Sunday
Taking Love
Dreamlike
Feelin’ It
Coffee Stains
A is for Apple
July Breeze
Finding Myself
T.D.’s
It’s Over